Subnational revenue expansion strategies are like therapeutics. They can have curative effects when administered correctly but adversely affect human health if abused. Similarly, the ideal goal for sustained IGR expansion is to consistently provide a growing population with adequate public goods that support entrepreneurial growth and citizens’ well-being and throw the door ajar for millions of people to escape poverty continuously. But regardless of the well-established relationship between IGR expansion and poverty reduction, the latter rarely features in the former’s strategy design considerations. The subject’s firmament copiously relays the redistributive relevance of tax-focused IGR growth to inequality while paying scant attention to its connection with poverty. Inequality reduction does not approximate the curtailment of deprivation. Yet, whereas IGR growth can, in total, have poverty-minimizing effects, particularly with the proper allocation of mobilized resources, its tax complement can considerably exacerbate poverty conditions. Despite extraordinary results of the statutory revenue allocations on subnational income, countries like ours can only consistently provide public services like good roads, health, and education for everyone by raising tax income. 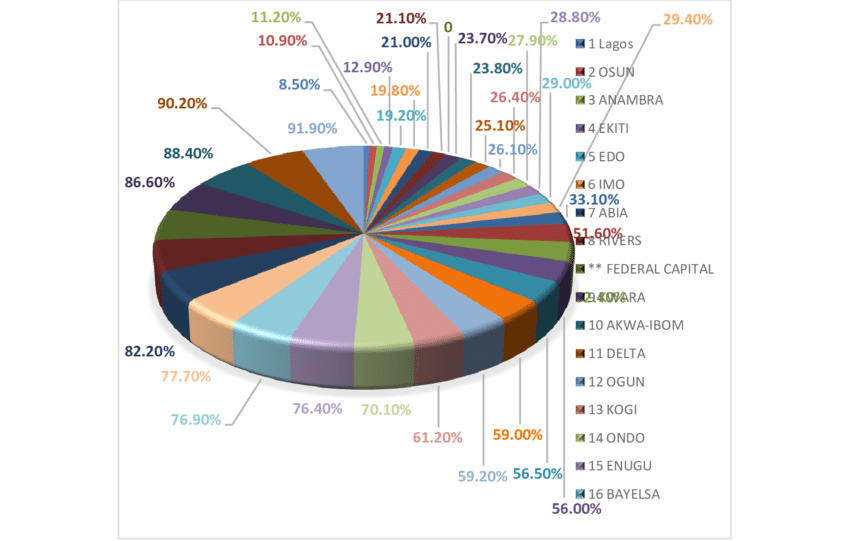 There are at least four reasons for ignoring the IGR expansion impacts on the poor. The first is the assumption that the government’s social expenditures, driven primarily by mobilized IGR, provide the best poverty reduction approach. Impliedly, there will be adequate targeting of the poor as long as the government prudently utilizes collected revenue in providing a conducive environment for the predominant economic activities of those in that socio-economic demography. Good examples include rural roads providing low-income subsistence farmers with market access and public health facilities cited in remote villages attending to the health needs of the poor. The second reason is the myth that because of the small size and the fewer taxes paid by the poor, the effects on them are likely to be minimal. But any additional payment levied on people surviving on less than a dollar a day and sometimes with dependents will constitute a significant financial burden. The third factor is playing down IGR expansion mechanisms as existing merely for revenue collection. While this is true, it does not excuse the burdensome collateral impacts of revenue collection activity on the poor. Most of the country’s poor are in the informal sector, with fixed and predetermined tax rates and no mechanism to isolate and treat them differently from the rest. Fourthly, the government rarely taxes most of the items consumed by the poor. This notion may hold to the extent of the rural poor but is untrue for the urban poor. Some of the essential food items consumed by the urban poor have inbuilt indirect taxes.

The recently published 2022 Nigeria multidimensional poverty Index [MPI] shows that 63% of Nigerians are multidimensionally poor. By estimating the percentage of the population suffering deprivations along three or more dimensions of well-being, including health, education, and living standards, the MPI provides a complete picture of the poverty level and captures the complexity of poverty beyond the traditional monetary measures. Further breakdown of the national multidimensional poverty shows that 72% of rural dwellers are poor while 42% of urban dwellers are poor. The Northeast zone recorded the highest incidence of multidimensional poverty at 77%, followed by the Northwest zone [76%]. The Southwest and the Southeast have the most negligible incidences, with 40% and 49%, respectively. The top five poorest states ranked in the order are Sokoto, Bayelsa, Jigawa, Kebbi, and Gombe States. The top five states with the lowest poverty incidences ranked in their order are Ondo, Lagos, Abia, Anambra, and Ekiti.

But the tax component of the IGR may aggravate the poverty conditions of the poor, who often have no reasonable taxable income. Yet, the state subjects them to paying some minimum fixed amount. Many poor people, therefore, end up paying a disproportionate share of the tax burden relative to their income. This unfair-tax impact mainly worsens when complimenting robust nontax revenue expansions are lacking. Subnational governments’ strategic pursuits of the latter often result in wealth-creating and welfare-improving opportunities that significantly reduce poverty. For instance, the provision of fee-earning public assets such as hospitals, schools, and markets will grow governments’ nontax revenues and demonstrate prudence in IGR utilization while creating income-earning prospects for the larger population, including the poor. In general, as sub-national governments’ fiscal orientations do not provide significant transfers to reduce the income poverty and multidimensional deprivations suffered by the poor, the latter will bear a disproportionate fiscal burden. It is a no-brainer that if a government diverts funds meant to provide health facilities in a locality, it aggravates their health deprivation and suggests that they have to pay more for alternative health support in other locations. The logic is the same for decadent and poorly maintained schools, roads, sanitation facilities, and many others.

There is a moderately weak albeit negative association [-39.1%] between MPI incidence and IGR per capita based on cross-sectional data on subnational governments. Digging deeper, we found that negatively-signed nontax revenue per capita is a robust and statistically significant predictor of MPI incidence across Nigerian subnationals compared to other IGR variables. In essence, the more state governments can grow their nontax IGR per capita, the lower the incidence of multidimensional poverty will be. This finding reconfirms the centrality of prudent utilization of previously mobilized independent revenue in the provision of paid-for services, which expands the citizens’ income-earning opportunities and the quality of spending of the subnational governments’ nontax IGR. Clustering data on MPI and IGR indicators revealed that Lagos State, with the second most minor poverty incidences and intensity, is also the best above-average performer in all IGR dimensions such as tax revenue, non-tax revenue, tax revenue per capita, and non-tax revenue per capita. The second group of above-average performers in MPI incidences and intensity comprising Oyo, Anambra, Delta, Imo, Ondo, Edo, Osun, Abia, Ekiti, and Kwara, did not perform on IGR indicators much better than the third group, such as Kano, Katsina, Enugu, Akwa-Ibom and Cross-River that performed below average on MPI incidences and intensity. The worst performers in MPI incidences, such as Jigawa, Sokoto, Bayelsa, Taraba, and Yobe, are also the lowest performers on IGR growth parameters.

Sadly, because the connection between dimensional poverty and nontax revenue per capita is not very apparent, there is little focus on it. Civil society organizations rarely task subnational governments to achieve significant IGR efficiency successes. All eyes, therefore, rivet on negative tax impacts on the poor. But taxation is a veritable tool for reducing poverty when deployed effectively and monitored to achieve the same. The starting point is the design level, where policymakers must determine the tax rate for all taxable assets and classes of taxpayers, beyond which it is an unfair burden. Equally, they must also determine such poverty-triggering rates for low-income taxpayers. Progressive governments must continuously acquaint themselves with the responsiveness of prosperity and well-being to the tax burden. Tax policies formulated or revised based on this understanding are more helpful in curtailing tax aggravation of poverty. Secondly, directly targeting the poor and the near-poor with tax exemptions complimented with public provision of critical infrastructure for prosperity creation, such as market access roads, free or subsidized agricultural inputs, and mechanized farming support and education, can considerably rescue many from the miry clay of deprivations.

Focusing on high levels of nontax IGR efficiency is consistent with the prosperity creation approach to banishing poverty. When subnational governments continuously drive nontax revenue expansion, they create entrepreneurs in their multiples. Let us consider a simple example of keeping a city clean. Lagos State government’s use of private contractors in waste management raises revenue for the government and keeps the city clean. Still, it has also expanded the value chain with many entrepreneurs comprising waste collection companies, outsourced truck maintenance and spares dealers, scrap iron, plastic, and aluminum scavengers, collectors and sellers of incinerated waste fertilizers from dump sites, and so on. As it is in the waste management space, it is also in education, public health services, and all areas where the government expands its nontax revenue opportunities. Fortunately, multiplying entrepreneurial opportunities is the most credible way of drastically minimizing poverty. Raising more entrepreneurs means creating more employment and income-earning opportunities which, in a dynamic reinforcing process, makes more entrepreneurs.

Since entrepreneurship-driven prosperity that banishes poverty thrives on freedom, the pursuit of efficient IGR processes strengthens the pursuit of good governance, freedom, and human rights. For instance, the provision of paid-for public water infrastructure, schools and health services, and security and justice infrastructure also imply the satisfaction of the human rights of citizens who benefit from these. All governments should ideally use all resources possible to ensure that citizens have access to essential public goods mentioned above because it is their human right. Again, driving the growth of entrepreneurship and the attendant investments are challenging without adequate security and a justice system. It will also make the revenue collection process much more complicated than it ordinarily would be. Therefore, an IGR expansion process recognizing and mainstreaming the maximization of citizens’ human rights and the considerable reduction of poverty levels will result in a more solid performance.

Finally, consistent with the social contract notion, subnational IGR expansion should focus on expanding citizens’ well-being. 63% level of multidimensional poverty is not indicative of a collective of state and local governments focused on growing the well-being of their citizens. Poverty and well-being are like a zero-sum game such that when citizens’ well-being grows, the poverty level shrinks by that magnitude and vice versa. Therefore, when subnational governments consider and set poverty reduction targets as an integral part of the IGR expansion strategy, its goal of enhanced citizens’ well-being becomes even more attainable. In the same vein, wastefully deploying previously collected independent revenues costs the citizens the opportunity for multiples of prosperity in that magnitude. That loss of well-being invariably means the growth of poverty. Thirdly, when state and local governments do not fully optimize their fiscal capacity and fail to exploit their revenue-generating potential comprehensively, they also deny the citizens the opportunities to reap the well-being benefits that should be the consequence. The resulting loss of well-being drive also increases the poverty level.