The International Tribunal for the Law of the Sea (ITLOS) has prescribed that pending a decision by the Annex VII arbitral tribunal, “Switzerland shall post a bond or other financial security, in the amount of $14 million with Nigeria in the form of a bank guarantee,” to obtain release of an oil vessel, seized by the Nigerian Navy for illegal operation.
ITLOS has held that Nigeria releases the Swiss tanker, San Padre Pio, its cargo and crew after Switzerland provides the guarantees. 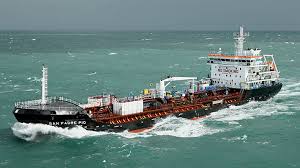 In addition, Switzerland should ensure that the master and the three officers are available and present at the criminal proceedings in Nigeria, according to the tribunal.
After satisfying the abovementioned conditions, Nigeria should release the ship, its master and crew and ensure that the officers are allowed to leave the territory and maritime areas under the jurisdiction of Nigeria.
In late January 2018, the Nigerian navy intercepted and arrested the 7,600 dwt vessel while it was engaged in ship-to-ship transfers of gasoil in the exclusive economic zone (EEZ) of Nigeria.
The tanker, operated by Swiss ABC Maritime, was arrested due to “unauthorized entry into Nigerian waters and illegal fuel trading” although the ship’s captain claimed that San Padre Pio had permission to ship the fuel to this country. It was reportedly the tanker’s fifth visit to Nigeria.
The 2012-built vessel was then ordered to proceed to Nigerian Port Harcourt, where it is still detained.
The sixteen crew members were moved to a prison and charged with “conspiring to distribute and deal with petroleum product without lawful authority or appropriate license, and with having done so with respect to the petroleum product on-board”. The charges were later amended to apply only to the master, three officers and the vessel.
Thereafter, the other crew members were released from prison and returned to the vessel, while the Master and the three officers stayed in prison before they were released and returned to the vessel upon the provision of bail in April 2018.
Under the bail conditions set by the Federal High Court of Nigeria, the master and the three officers are not allowed to travel outside Nigeria without prior approval or order of the court.
Switzerland claims that bunkering activities carried out by the vessel in the exclusive economic zone are part of the freedom of navigation and that it has exclusive jurisdiction as the flag state over the ship with respect to such activities.
ITLOS now said that “it appears that the rights claimed by Switzerland in the present case are plausible”.
In April 2019, San Padre Pio was attacked by four armed pirates while anchored off Bonny. Two perpetrators managed to board the tanker and open fire towards the accommodation. According to the IMB, the on-board Nigerian naval guards returned fire resulting in the persons retreating into their boat and escaping. One guard was injured during the shooting and was given first aid by the crew.
“The M/T “San Padre Pio has not only been detained for a considerable period of time but also the vessel and its crew are exposed to constant danger to their security and safety,” ITLOS noted.