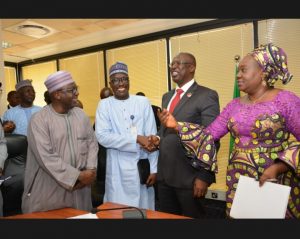 Timipre Sylva, a Niger-Deltan from oil rich Bayelsa State, who was also a former governor of the state, appointed to the post of minister of state for petroleum resources by President Muhammadu Buhari, sworn in Wednesday immediately assumed office pledging that he would reposition and chart a way forward for the petroleum sector in Nigeria.

Sylva, as junior minister, will have President Buhari, who has chosen to retain the portfolio of substantive minister of petroleum resources, which he assumed since he was first elected in 2015 for his first term,
as head of the ministry.

The new minister is quoted in a statement issued by Ndu Ughamadu, group general manager, group public affairs division of the Nigerian National Petroleum Corporation (NNPC) to have pledged to work with the experts at
the NNPC and the other departments and agencies under the ministry to move the sector forward.

He was welcomed at a ceremony organised for him at the NNPC Towers in Abuja where he stated that with the calibre of workforce in the Ministry, he was sure that the nation’s oil and gas sector would move to the next level. Sylva was accompanied by his wife, Alanyingi.

A former Governor of Bayelsa State, he is said to bring to his new role several years of cognate experience in the petroleum sector.

According to Ughamadu, the new minister of state contributed profoundly to the institution of the Amnesty programme in the Niger Delta region which, over time, has led to restoration of peace in the oil producing
areas of Nigeria.

Folashade Yemi-Esan, the permanent secretary of the ministry had earlier reassured Sylva of the readiness of all members of staff in the ministry to support him to succeed in the onerous task of transforming the Nigerian oil and gas sector for the good of all stakeholders.