Sentiment was largely mixed in the fixed income market last week as bond participants were relatively quiet; OMO participants were buy-side driven, while NTB participants were sell-side driven. Regardless, analysts project improved liquidity levels to drive up bubbling levels of market activity this week in the secondary market, and barring any major funding pressure from the Central Bank of Nigeria (CBN). 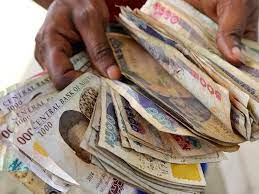 On the domestic foreign exchange market, the Naira closed flat from last week’s trade at N502 to a dollar in the parallel market despite the news that the apex bank has begun the process and framework that will see the monetary authority launch its digital Naira before the close of the year.

The local currency depreciated by N2.35 week on week against the greenback to N411.50 on the official NAFEX window as the supply of dollars dropped by around a third this month, prompting the Central Bank of Nigeria to take steps to boost liquidity by increasing forex allocation to banks. Thus, most market participants maintained bids of between N400 and N420.77 per dollar with the official NAFEX rate.

At market close on Friday, the Overnight (O/N) rate rose by 5.68 percent to close at 22.93 percent as against the previous week’s close of 17.25 percent, and the Open Buy Back (OBB) rate rose by 5.33 percent to close at 22.33 percent from 17 percent on the previous week’s close. Money market rates rose by an average of 551 basis points following the FX retail auction by the CBN. Compared with the previous week, the overnight rate expanded by 768 basis points to 22.9 per cent, as debits for cash reserve ratio, Treasury Bill net issuances of N79.22 billion, and Central Bank’s weekly auctions outweighed inflows from open market operation (OMO) maturities valued at N80 billion.

Meanwhile, trading activities in the treasury bills secondary market turned bullish following demand for the mid- and long-dated OMO bills resulting from increased liquidity in the interbank market on Wednesday. Consequently, average yields across all instruments contracted by 13 basis points to 8.2 per cent.

Elsewhere, across the market segments, the average yield at the OMO segment declined by 33 basis points to 9.7 percent from the previous week. Similarly, the apex bank sold bills worth N20 billion to market participants at the OMO auctions last week while maintaining stop rates across three tenors as with the previous auction.

Bearish sentiments returned to the bonds market as investors’ demand weakened following sustained expectations of higher yields. As a result, the average yields widened by 6 basis points to 12.3 percent from the prior week at the short (+4bps), mid (+10bps) and long (+1bp) segments of the benchmark curve following sell-offs of the JAN-2026 (+24bps), NOV-2029 (+20bps) and JUL-2045 (+30bps) bonds, respectively.