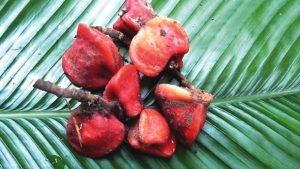 The plant is regarded as a multipurpose perennial herb as the leaves are used for wrapping and packaging local delicacies such as ofada rice, eko (corn jello), moi-moi (bean pudding), the petiole is used as weaving materials for mats and as a building material, while the seed is a natural source of thaumatin, an intensely sweet low-calorie, sugar-free sweetener and flavour enhancer,which has in recent times generated interest in the global industrial sector. In many parts of the world, It is used as a ﬂavour enhancer in food applications including;ice cream, chewing gum, palmwine, carbonated drinks, and has proven relevant in the pharmaceutical sector as it helps to mask unfavourable tastes found in some drugs.

According to dietitians, thaumatin is increasing gradually on a global level as the high consumption of nutritive sugar and artificial sweetened sugary treats has resulted in increased adverse health effects such as obesity, diabetes, heart blood pressure and cardiovascular diseases. As a result, efforts are being made globally to reduce nutritive sugar consumption, giving rise to thaumatin consumption as a healthy alternative, supported by its natural sugar-free content. Thaumatin is also acclaimed for its unique sweetness index which is rated by dieticians as being 3,500 times sweeter than sugar. The 2008 Guinness book of World Records publication rated the commodity as the sweetest natural substance known to mankind.
Peter Stephen, chief nutritionist,department of dietrics, University of Benin Teaching Hospital (UBTH),said the discovery of thaumatin as a low calorie and low carbohydrate sweetener is drawing international prominence, gaining the attention of pharmaceutical,beverage and confectionery and serve as a substitute to sugar in some industries, notably for its use as a natural sweetener compared to synthetic sweetener.

Economic relevance of thaumatin
The global thaumatin market has recorded expansions in the past few years , driven by increased health awareness among consumers around the world and its rising potential as a substitute for sugar and supplementary utilisation in dairy and non-dairy products.

Findings by Market Data Forecast, an industry reports and statistics firm,showed that the global Thaumatin market size was valued at $170 million in 2021, and is estimated to hit $220 million by 2026 at a CAGR of 4.5 per cent.

Global market data also showed that the market value for low calorie sweeteners in the U.S stands at $900 million per annum, with thaumatin priced above other sweeteners because of its natural sweetness.
In addition, a recent report by the Raw Materials Research and Development Council (RMRDC) showed that Nigeria possesses a strong capacity to produce thaumatin to meet increasing demands, noting that the country can generate N20 billion annually in foreign exchange equivalent and a boost to the country’s economic diversification goal.
RMRDC further disclosed that the trade in thaumatococcus daniellii, from which thaumatin is derived, provides domestic support to about one million families and serves as a source of occupation for about 75,000 people,especially women in different parts of Nigeria. The council however noted that the figures generated can be better improved if more attention and investments are placed on the commodity and its resultant value chains.
Challenges hindering thaumatin production in Nigeria

Charles Akhigbe,managing director,Ames-Edo Inland Dry Port, noted that the plant has been growing in demand in Europe and America as the climatic conditions in both regions does not support the cultivation. He however bemoaned that the plant has been prone to uncoordinated exports mostly dominated by individuals while the government and many large agricultural organisations are yet to make any significant contribution to increase production and control exportation. He added that the quantities being exported are not adequate to attract large foreign exchange,making Nigeria lose export competition to other African producing countries such as Sierra Leone and the Democratic Republic of Congo.

Akhigbe said significant revenue can be generated by the government and stakeholders if appropriate frameworks are set up, adding that stakeholders of the thaumatococcus value chain should promote awareness on its potential for export and relevance in the local food processing industries as well. He also stressed that the government can play an active role by partnering the private sector to support job creation across the value chain, coordinate exports and exploit market opportunities in the African Continental Free Trade Area (AfCFTA).