By Ekerete Ola Gam-Ikon
The modern 124-year Olympics has come and gone but left us with too many lessons to draw from as we continue to live above the coronavirus pandemic, which caused the Games to be postponed for the first time in its modern history.
The International Olympic Committee (IOC) and the Japanese organisers were adamant even as the petitions increased against holding the Games and under a State of Emergency declared in the City of Tokyo shortly before the commencement of the Games.
The Olympics is the biggest sporting event in the world and faced the biggest threat we have seen in COVID-19 pandemic, so as the postponement was announced in March 2020 by 12 months, there was great relief for the global insurance industry that the Games were not outrightly cancelled as the losses were estimated to reach about 10 times the losses resulting from the postponement.
According to a Reuters report quoting brokers, if cancelled, insurers were to have faced a $2-3 billion loss, which would have been the largest ever claim in the global Event Cancellation Insurance market.
Tokyo 2020 may have been smaller, failed to attract the biggest stars and the level of sponsorship associated with the Olympics, but it has significantly improved the way we are managing the COVID-19 pandemic and traditional risks such as weather, terrorism, political and social justice, coupled with the travel restrictions within existing transport systems.
Size of Tokyo 2020 Protection
The just concluded Olympic Games had 11,500 athletes competing in 33 different sports across 339 events in 42 venues. About 79,000 officials, journalists and support staff were welcomed with zero spectators, according to the data provided by the IOC.
While the IOC reportedly invested $1 billion in the host country in line with its tradition, Japan itself invested over $12.5 billion and the total insurance coverage for the Games was around $2.5 billion. The IOC traditionally sets aside $800 million of insurance for each Games besides what the Local Organising Committee (LOC) would do as well as that of broadcasters, usually in huge amounts.
The primary insurance taken up by the IOC is Event Cancellation (EC) cover and Tokyo 2020 had both the IOC and LOC having the larger share of $1.4 billion, broadcasters $800 million, then teams, sponsors and hospitality organisations $300 million to make the total or $2.5 billion for insurance coverage.
The Challenges of Insuring Tokyo 2020
Ordinarily, EC [event cancellation] policies are bought in advance to cover cancellation due to infectious diseases but, for the Games in Tokyo, it was necessary to clarify that the policy covers the one year postponement forced by COVID-19 pandemic.
More so, with many insurers rushing to exclude COVID-19 pandemic from the policies last year, spurring the cancellation of events across the world over several months, the pricing of the risks needed to be revisited and formed a major part of the consideration for the postponement.
Elsewhere, those who had secured the use of the apartments built in the Games Village also needed to be sorted before and after the postponement was announced, with insurance implications.
Broadcasters, sponsors and hospitality organisations that had mobilized their resources, though with uncertainty, incurred costs that followed the one year postponement and some could not have their full strength at the Games.
In all cases, insurance payouts following the postponement could have been difficult as organisers and others would have still managed to earn good revenue as the Games finally took place.
Key Takeaways
Generally, it was interesting to note that the entire Tokyo 2020 was powered by renewable energy, an emergent solution to the lack of electricity in Africa. Knowing this was possible emboldens one to believe that, indeed, new solutions can be found for age-long problems as we have, particularly, in the insurance sector.
Also, the beautiful medals we saw the athletes display are products of recycled smartphones, laptops and other old electronic gadgets donated by the public, according to reports from the Tokyo Medal Project Team.
Furthermore, Africa’s participation at Tokyo 2020 revealed that we would probably need the Association of National Olympic Committees of Africa (ANOCA) to do more if Africa will get more out of future games scheduled for Paris (2024), Los Angeles (2028) and Brisbane (2032). Hopefully, the Olympic Medal Count showing only 13 African countries out of the 54 that participated will stimulate some new thinking: 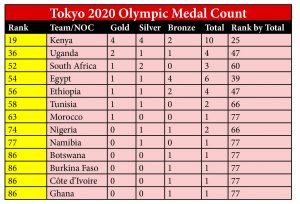 Specifically, for the global insurance industry, it is great to know that Allianz, the German insurance giant, is completing the first year of an 8-year insurance agreement with the International Olympic Committee to provide insurance cover for its Games. This agreement will run until Los Angeles 2028!
Lloyds of London insurers and reinsurers, like Munich Re and Swiss Re, faced the biggest test for event cancellation insurance with Tokyo 2020, and according to Fitch Ratings, both reinsurers would have been paying out about $750 million (Munich Re, $500 million; Swiss Re $250, million).
It is worthy of note that the lessons learnt from Tokyo will be taken to Paris 2024 and that provides some reasonable time for insurers in Africa to research and study the experiences of Tokyo 2020 and be in a better position to deliver similarly to projects of such nature (not size) within the continent; for example, the African Continental Free Trade Area (AfCFTA).
Last Line
Was the Nigerian contingent to Tokyo 2020 insured? Which local insurer provided the insurance cover? What was the experience like waiting for the feared announcement of cancellation and later postponement?
The development of our insurance market and systems will be boosted by the sharing of more of such knowledge and the relevance of insurance would be more readily appreciated with connected thinking as I have tried to show here.
______________________________________________________________________________
Ekerete Ola Gam-Ikon, MNIM, CPP, a Management Consultant on Insurance and Entrepreneurship; he can be reached on +234-802-585-0344 (WhatsApp only) or eolagamikon@gmail.com
Businessamlive Website Stats