“A wise person should have money in their head, but not in their heart.” –Jonathan Swift Paulo came from very humble beginnings. Through hard work and luck, he became a fabulously rich executive.

Unfortunately, his new wealth changed him, but not for the better. Money seemed to illuminate a kind of arrogant and abusive behavior that had not surfaced before. 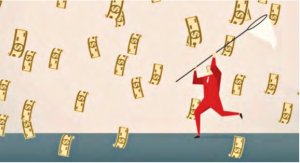 Paulo started believing that his wealth gave him the right to do whatever he wanted, which resulted in questionable ethical behaviour.

Instead of assessing people by their qualities, Paulo would classify them according to their wealth. He saw poor people as total losers.

His deteriorating ethics led him to shortchange others ruthlessly in order to add to his already sizable fortune.

Paulo’s rising financial worth corresponded with an equal descent into the social pitfalls of wealth: His lack of compassion and empathy contributed to his social

Paulo’s obsessive pursuit of money turned into an addiction: The more money he made, the better he seemed to feel about himself.

It seemed like it gave him temporary “highs” through surges of dopamine, the brain chemical that nature rewards us with when we do things that help us survive.

But like with any addiction, the tables started turning on Paulo. His constant striving for wealth and material possessions increasingly made him unhappy.

Not only did money issues become a key driver in his divorce, it also estranged him from his children. Eventually, like a modern day Citizen Kane, Paulo found himself alone in his large estate, surrounded only by his servants, exemplifying the tragedy of wealth and self-centeredness.

The phrase “ Money makes the world go round” originated in the famous musical Cabaret. The singers’ burlesque and mocking duet nurtures the illusion that with money, everything is possible. In fact, many of us have irrational, magical ideas about what money can do for us.

To be sure, money can give us more options. Previously closed doors may suddenly open up. And the versatility of money makes it one of the strongest drivers of human behaviour. From a symbolic point of view, it is a remarkable invention.

It commoditises labour into a storable form that can be exchanged easily for goods or services. In addition, it can symbolise economic security, status, power, love, joy and more.

Furthermore, many people use money as a way of keeping score in the game of life. They seem to participate in a race in which the winners are those who make the most money.

Although few people believe that money can buy happiness, many imagine that more money would make them a little happier.

Unfortunately, all too often, playing the money game exacts a heavy price. When the acquisition and control of money becomes a person’s primary goal, it may contribute to a host of personal and interpersonal problems.

These range from pangs of anxiety, depression, paranoia, impotence, impulse spending, gambling, social isolation, suicide to even murder. Furthermore, the insatiable pursuit of money can turn a decent person into a very unpleasant one.

Like other addictive behaviour patterns, money disorders are often symptoms of a troubled past. Unresolved issues manifest themselves as persistent, predictable, often rigid patterns of self-destructive money-oriented behaviours.

Money is a prime source of interpersonal difficulties, including marital and familial strife. As in Paulo’s example, it is often also a common trigger of divorce and estrangement.

When we find ourselves prone to overspending, underspending, hoarding, serial borrowing, gambling or other forms of pathological behaviour, we must go back

to our early years.

In our inner theatre, we all have a script about money based on what we observed during childhood. We must explore what money meant for our parents and how their behaviour has influenced our own attitudes, perceptions and expectations.

Questions to ask include: Did our parents fight about money? Did they use money as a form of control? Conversely, was giving money a form of showing love?

If we look deep inside ourselves, does thinking about money bring up feelings of worry, guilt, anger, sadness, power, love or joy? Money and all that comes with it

can turn into a measure of self-worth and identity. In contrast, a lack of money contributes to feelings of powerlessness. In a sense, our outer world of possessions and lifestyle can reveal our inner world.

It may be a truism to say that you aren’t really rich until you have something money can’t buy. People obsessed by money tend to forget that they cannot buy happiness, feelings of togetherness, kindness and many other intangible things in life.

There is a Chinese saying: Money can buy you a house but cannot make it a home. Although money may provide access to the finest earthly pleasures, it may decrease your ability to enjoy the mundane joys of everyday life.

The power and meaning we give to money very much determines how we live our lives. Our ability to integrate our emotional needs with material possessions reflects how well we bring our values, beliefs and desire into our world.

But while doing so, it is important to remind ourselves that the most beautiful things in life consist of good memories and moments. If we don’t value these, they can easily pass us by. Thus, it bears repeating that money can’t buy things like time, happiness, inner peace, integrity, love, character, health, respect, morals, trust and dignity.

More than 2000 years later, Epictetus’s words remain true: “Wealth consists not in having great possessions, but in having few wants.”

Director of The Challenge of Leadership, one of INSEAD’s top Executive Education programmes.