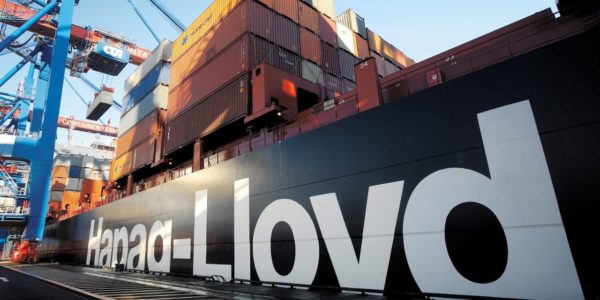 The latest addition was Hapag Lloyd AG Limited, a German international shipping and container transportation company which is the world’s fifth largest container carrier in terms of vessel capacity.

The shipping line made its maiden call at the terminal recently with one of its largest vessel, Navious Azure, a container ship built in 2007 with gross tonnage of 39,906 tonnes and length overall of 260.5m.

This is the first time a Hapag Lloyd ship was calling on any Nigerian port and choosing Ports & Cargo of all the terminals points to the ingenuity that the port concessionaire brings to business. In the last few years, Ports & Cargo has invested in massive acquisition of handling equipment that now sees the terminal as one ready for serious business.

In December 2019, the terminal in order to position itself as a first-choice terminal for importers, exporters and shippers in Nigeria and West Africa as a whole, acquired new equipment worth over 20 million euro. The new equipment included five units of shore cranes, nine reach stackers, 10 terminal tractors, five Nissan pickup vehicles, four trailer backs and other machinery.

At the commissioning of the new equipment at the terminal at Tin Can Island Port, Lagos, Adekunle Oyinloye, group managing director of SIFAX Group, mother company of Ports & Cargo Terminals, hinted that the acquisition was part of the company’s “strategic investment to deliver quality service to its clientele and to further attract more patronage.”

Ports & Cargo Handling Services Limited, the flagship company of SIFAX Group. Code named “Quantuam Leap,” SIFAX Group is respositioning itself to become the first choice terminal not just in Nigeria but in West Africa. The company had also revealed its plan to increase revenue by over 300 percent in the five years.

“One of the ways, we can achieve our set targets is to first begin with investment in equipment which will complement our excellent personnel asset. These new equipment are the best and latest in town, they will catapult us into the next level growth we are working towards,” the GMD noted.

John Jenkins, managing director, Ports & Cargo Handling Services Limited, had also said there was “a need to acquire the latest equipment in order to meet the architecture requirements of modern ship calling the terminal.”

While welcoming the vessel’s crew to the terminal, Jenkins expressed the company’s delight at the vessel’s maiden call, adding that the development is a testimony of the terminal’s readiness to provide cutting-edge port terminal services to more clients.

He said: “We are excited to have this ship berth at our terminal today. We are delighted that Hapag Lloyd, which is one the world’s largest ocean shipping fleet owners, prefer our terminal for their operations and the shipping line will call frequently at this terminal.

“This business relationship with Hapag Lloyd is one of several partnerships we have been working on in the past few months. This new wave of patronage is a result of the massive investment we have made both in modern equipment, quality personnel and improved processes over the years. All these have translated in better service delivery, which is what an average client wants.”

While responding on behalf of the vessel’s crew members, Captain John Trafiero, who was overwhelmed by the hospitality and excellent service provided by the company, expressed his joy at berthing at one of Africa’s prime ports.

“This is a resounding welcome we have received here today and it would stick in our memories wherever we sail to. Though we are sailing back very soon, my crew and I cannot wait to be back here again,” he said.