President Muhammadu Buhari on Wednesday promised that his administration would empower over 100 million Nigerians currently trapped in poverty within the next 10 years through rapid transformation of the nation’s economy. 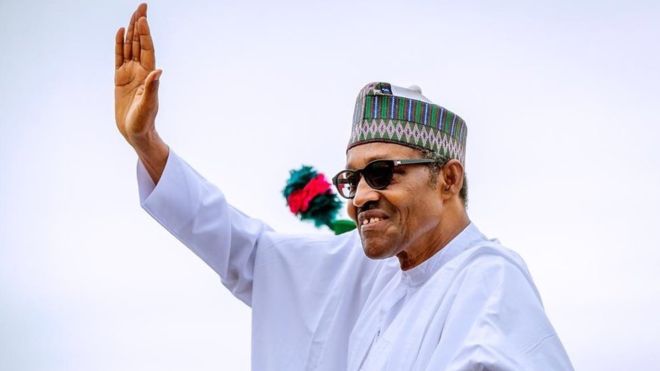 The President made the promise in his speech at the maiden June 12 Democracy Day celebration in Abuja.

Buhari, who projected that the nation’s Gross Domestic Product (GDP)  was expected to grow by 2.7 per cent this year, noted that as of today the external reserves had risen to US$45 billion enough to finance over nine months of current equal commitments.

He said: “This administration has laid a foundation of taking bold steps in transforming our country and delivering our people from shackles of poverty.

“First we will take steps in integrating the rural economy to national economic grade by extending access to input to rural farmers as well as credit to rural micro businesses and opening up many critical feeder roads.

“Secondly, all small scale enterprises in towns and cities would share facilities currently available so that we can continue to encourage and support domestic production of basic goods to improve our lives”, the President added.

He assured Nigerians that in the next four years his administration would remain totally committed to improving the lives of people by consolidating on current efforts targeted at mitigating the socio-economic challenges Nigerians are facing currently.

Reflecting on the achievements recorded by his administration during his first tenure, Buhari pledged that over the next four years his government was committed to assembling a strong team of Nigerians, and allies, to implement its transformative plans and proposals.

Specifically, he assured that the people will see significant focus, resource and, where necessary reform, in tertiary and technical education to reposition Nigeria’s workforce for the modern technological age.

According to him, the government will accelerate investments in primary, secondary and tertiary healthcare programmes, interventions and infrastructure as well as in upgrading of our medical personnel to stem the flight of our best trained people.

On food security,  while noting that Nigerian farmers have made great strides in local production of rice, maize, cassava, poultry, fertilizer, fisheries and sesame, the President said his administration remained resolute in supporting private sector in emphasizing backward integration and export expansion plans.

Expatiating on plans to make the environment more friendly and boost agricultural productivity, the President said: “Felling of trees to provide energy for domestic use is taking its toll on our rain forests, our ecology and our climate. Accordingly, we are taking steps to harness cleaner and more sustainable sources of electricity. We export over 2 million tons of cooking gas, yet we consume less than half a million tons.

“We will work to address this issue and support rural communities with challenges of safely switching from firewood to cooking gas.

“Dedicated agro-industrial processing zones will be developed on a PPP basis to increase farming yields, agricultural productivity and industrial output.

Buhari promised further that in the next four years, “over 2,000 kilometers of ongoing Federal road and bridge projects across the country will be completed to reduce journey times and the cost of doing business.

“As I mentioned earlier, critical feeder roads will be built to facilitate easier transportation for people and goods from rural areas to major roads.

“We are at advanced stages of securing investments to modernize and expand our transmission and distribution infrastructure, ensuring that electricity is available and affordable for all Nigerians.

“Several rail, seaport and airport projects are at various stages of completion. We will open the arteries of transportation nationwide”, the President assured.