By Onome Amuge
TikTok, a video-sharing social network service, has outstripped Facebook as the most downloaded social media app in the world, according to a survey by App Annie, a globally acclaimed digital analytics company. 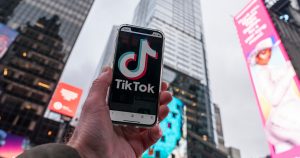 With the latest rating, the social networking platform owned by ByteDance, a Chinese company, not only toppled Facebook to the top spot, it is also  the only app not owned by Facebook to make the global top five downloaded apps position.

Industry experts noted that the growth in the TikTok figures was boosted by a combination of factors, one of the most pertinent being the covid-19 global pandemic which resulted in lockdowns across the world. This, they said, accelerated the usage of the short video sharing platform among a demographically diverse population.
Moreso, analysts explained that TikTok has fast become one of the fastest growing post-pandemic outlets where people ventilate their views and talents and while most of the other social media platforms battle with privacy and encryption issues, TikTok has continued to blossom without having to deal with any of the aforementioned issues.
Data gathered by Sensor Tower, the leading provider of market intelligence and insights for the global app economy, showed that TikTok, including Douyin, its Chinese iOS version, amassed 383 million first installs with consumers spending an estimated $919.2 million in the first half of 2021.
Currently, the app has been installed over three billion times, making it the world’s most downloaded social media app. The other four apps with over three billion installs are owned by Facebook and they include; Facebook, WhatsApp, Instagram and Facebook Messenger.
Businessamlive Website Stats