Months after it consummated a share sale and purchase deal handing it 93.41 percent stake held by a group of core investors in Union Bank of Nigeria Plc, Titan Trust Bank Limited has made a Mandatory Takeover Offer (MTO) of the remaining 1,927,532,558 ordinary shares held by minority shareholders of Union Bank at N7 per share. 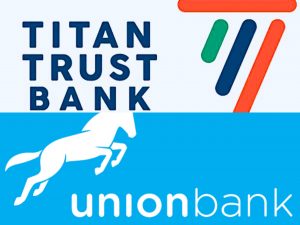 Announcing this in a letter to the Nigerian Exchange Limited (NGX) on Monday, Union Bank said Titan Trust has received the approval of the Securities and Exchange Commission (SEC) to launch the MTO.

“The MTO is priced at N7.00 per ordinary share; being the price at which the Block Trade was executed. The Qualification Date for the MTO is 5.00 pm on Monday, 31st October, 2022 – which is the date on which the names of shareholders must be in the Register of Members and is the settlement date for trades that are executed on Wednesday 26th October, 2022,” Union Bank said.

Meanwhile, minority shareholders of Union Bank are reported to have expressed satisfaction with the announcement of a N7 per share premium MTO by Titan Trust Bank Limited.

The shareholders also commended Titan Trust Bank’s transparency and trust in offering the same MTO to both the minority and majority shareholders of Union Bank, a gesture not common in the Nigerian banking industry. This development has further consolidated TTB’s stance to protect Nigerians and their investments in the bank and create wealth for its shareholders.

Titan Trust Bank, in pursuit of an expansionary course with the objective of building a stronger brand capable of taking on a larger market share of a continent striving for financial inclusion, had taken the financial industry by surprise after it announced its acquisition of 93.41 percent holding in the over century-old Union Bank. This was coming within barely three years of the bank’s establishment. The deal, regarded as one of the largest acquisition deals in the history of Nigeria’s banking industry, with an off-market deal worth N191 billion, was, however, formalized earlier this year with Tropical General Investments Limited (TGI Group), the parent company of TTB, becoming majority shareholder and core investor in Union Bank.

Within a few months of the acquisition of Union Bank by the TGI Group, the retail lender is beginning to gain a lot of stability and also earn confidence of the public following the emergence of a new leadership team which the group has assembled to make the lender a bank of first choice for Nigerians in the very near future.

Business analysts are optimistic that the new measures and innovations being injected in UBN by TTB will pay off soon even as the lenders continue with their integration process.

TTB, owned by the emerging markets-focused investment firm Tropical General Investments Limited (TGI), was established to take advantage of the identified gaps in the banking sector and address the unmet needs of the retail mass market, SMEs and corporates.

Formed approximately three and a half years ago, Titan Trust got a national banking licence to operate in Nigeria and got off to a quiet start although it was positioning itself as a challenger bank.