The partnership with the Lagos state government enables Lagosians to use the Cowry card across the 13 kilometres of track proposed for the project. The first phase of the track, from Marina to Mile-2, supports 200,000 daily passengers, who can now seamlessly enter and exit stations through TAP’s state-of-the-art turnstiles. Upon completion, phase two, from Mile 2 to Okokomaiko, will enable up to 500,000 daily passengers  to manoeuvre between  rail, bus and ferry stations easily.

TAP, in a statement, noted that in Nigeria, 64 million adults don’t have access to banks which limits people’s ability to withdraw cash for use on public transportation.

To solve this problem, the company explained that the Cowry card, an ingenious card that is used to pay for transport digitally, first trailed on buses in 2020,  widening financial inclusion for Africa’s unbanked population.

“In just four years, Cowry cards have been used in six states and helped to make 3.5 million monthly contactless transactions on buses,” the statement said.

TAP noted that it is helping to advance financial inclusion among the mostly unbanked population with its effective processing of micropayments, which are essential to the economy. The company also seeks to digitise the entire informal market with contactless cards and pave the road for genuine financial inclusion by assuring 99.9 per cent reliability in cashless transaction procedures across the entire African economy.

Riders touch their Cowry cards against the tempered glass-protected state-of-the-art turnstile validators, which use Near-field communication (NFC) technology to enable communication between cards and the automated collection points. 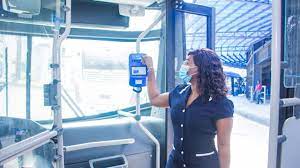 Through the innovative payment system, TAP’s pay-as-you-go card dramatically lowers fare evasion. Unlike riders on other lines, the 500,000 daily passengers using the Blue Rail Line, will not have to  endure the old, arduous procedure of having their tickets manually examined. To enhance easy operations,turnstiles will operate at Alaba, Marina, National Theatre, Mile 2, and Orile.

Commenting on the project, Olamide Afolabi, Co-founder and CEO of Touch and Pay Technologies, said the company is thrilled to facilitate and digitise payment on behalf of the Lagos Metropolitan Area Transport Authority (LAMATA), adding that TAP has deployed its NFC payment solutions on BRT buses, ferries, and trains.

He further stated that; “Our contactless payment solutions have been a huge success. We have created a 21st century solution for today’s passengers. Up until now, train fares typically worked on low-value cash transactions, whereas most electronic cards don’t allow for payment below $10, which was problematic for many passengers.

“Our Cowry card, which enables microtransactions between 10 cents and $10, bridges this gap. People can now use a digital and modern method to pay for their train journeys without carrying huge amounts of cash. We are optimistic that even more passengers will discover the benefits of this fast, yet reliable technology, which unifies transportation in Lagos – for the first time.”

Michael Oluwole, co-founder and chief growth officer of Touch and Pay Technologies, explained that the payment is a social issue, not a technological one, which is why solutions to solve transit payment issues are a priority for the company.

“In the past, foreign companies were tasked with solving our local transportation problems. We’re pleased that we are the first local company to deliver this unifying solution,” he added.

On the launch, Elias Akin, chief technology officer of Touch and Pay Technologies, assured that the company  has taken all necessary steps to ensure that its users’ data is secure. He added that the technology is very easy to use because TAP understands the various demography of its users.