Efforts at curbing greenhouse gas emissions could be more effective if energy companies could get a sharp grip on how investors measure climate risk in their portfolios. A recent paper by experts at Wharton and elsewhere published in Nature Energy achieves precisely that: it details how investors and financial professionals incorporate climate risk into their decisions, and how energy companies are shaping their response to climate change while addressing “transition risks,” or the legal and regulatory challenges they face in that journey. 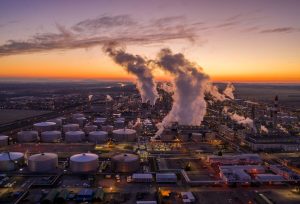 Signs of a Tightening Regime

The backdrop for the paper is the changing regulatory landscape as it relates to climate control, especially after the 2005 United Nations Paris Agreement sought to limit the increase in global temperatures in this century to well below 2°C above pre-industrial levels. In line with that agreement, the Biden administration has pledged to cut U.S. greenhouse gas emissions 50% to 52% below 2005 levels by 2030. Those goals would have to eventually percolate down to energy industry participants through laws and regulations.

“Even though today there may not be regulation everywhere in the U.S. that would make energy companies pay for emissions, there are many signposts that stricter regulations are coming,” said van Benthem. (California and 11 Northeastern U.S. states that make up the Regional Greenhouse Gas Initiative have carbon pricing policies in place.)

“It’s not very difficult to pressure companies once the government decides to have a full price on emissions, like in the European Union, where about 50% of all emissions are priced in their carbon trading system,” van Benthem continued. “There’s a real risk for companies in the U.S. also that this requirement may come to the U.S. in the next five, 10, or 15 years.”

Investors care about three types of emissions: Scope 1 emissions, which are from sources owned or controlled by the firm; Scope 2 emissions, or those associated with the purchase of electricity, steam, heat, or cooling; and Scope 3 emissions, which result from activities upstream or downstream in the value chain that an energy company does not own or control.

As the paper put it, investors incorporate climate risk management in their decisions in three ways: “engagement” with the companies in their portfolios to help reduce emissions; “divestment” or selling their holdings in energy companies that fail to meet their criteria; and “alignment,” or investing in companies “that are best placed to respond to a net-zero transition.”

The paper cited two examples where investor actions produced the results they desired. In May 2021, a majority of ExxonMobil shareholders voted against management to elect three board members proposed by the activist hedge fund Engine No. 1, which argued that ExxonMobil “has no credible strategy to create value in a decarbonizing world.” Also that month, Chevron saw 61% of its shareholders voting in favor of a proposal to cut Scope 3 emissions; in October 2021, Chevron announced an emissions goal that includes Scope 3 emissions.

Climate risks have varying degrees of impact on the fortunes of energy companies. “For instance, fossil fuel-dominated electricity generators, which face pressure to shift to cleaner generation mixes, would probably lose along the transition to a net-zero economy,” the paper stated. On the other hand, renewable energy generators and electric vehicle companies tend to benefit as carbon regulations tighten.

The paper focused on how different types of oil and gas companies respond to increased investor pressure. Oil & gas companies face a fundamental choice between maximizing shareholder returns from their existing business and diversifying into renewables by using their skills, capital, and market positions in that transition. Here, it applied “a lens of finance theory” to examine a related choice: whether diversification and risk hedging should occur within or outside these firms.

“In a frictionless world, firms simply pass through their risks to investors, who can perform any hedging or diversification they desire,” the paper stated. Investors who care about climate risks could move their monies to, say, renewable energy companies, leaving oil and gas companies free to continue with their existing business models. But oil & gas companies face frictions such as difficulty in raising capital, which make internal hedging and diversification a more attractive choice. Moreover, those companies may also find it easy to use their skills to diversify into renewables — an approach that morally conscious investors might support.

European IOCs such as Royal Dutch Shell and BP have strategies focused on reducing Scope 3 emissions and investments in new energy sectors such as wind, solar, storage, electric vehicle charging, and biofuels. Stringent regulations of carbon emissions in their home markets and the supporting legal and political frameworks in European countries influence those approaches. For instance, a recent Dutch court ruling held Shell “partially responsible” for climate change and ordered the company to reduce its carbon emissions. European IOCs also face stronger expectations from the public, activist investors, and their employees to address climate change.

European IOCs believe they are well placed to efficiently manage their transition risks through internal diversification, the paper stated. For one, their size and good credit ratings enable them to successfully raise money for large and risk diversification projects. Second, they have “transferable skills and synergies with existing operations” to succeed in renewables. Third, their long experience in government relations could be useful in launching new energy businesses.

Most European IOCs expect to continue oil and gas production until at least 2050, offsetting the resulting emissions through land-based forestry offsets and other mechanisms. Some exceptions stand out, such as BP, which has announced plans to substantially cut oil and gas production by 2030. Shell, on its part, recently bought electric vehicle charging companies in the U.K., and is investing in solar power.

Another outlier is Orsted, the former Danish oil and gas company which over the last six years has transformed itself from a predominantly fossil fuel company to become the world’s largest developer of offshore wind power. Orsted sold its oil and gas business in 2017 to make the transition to renewable energy.

In contrast, U.S. oil companies like ExxonMobil and Chevron are largely focused on their core business “with few ambitions for net-zero that include Scope 3 emissions,” the paper stated. It cited ExxonMobil’s plans for reductions in methane and other emissions, and Chevron’s “aspiration” of net-zero emissions from its upstream oil and gas production by 2050.

According to the paper, IOCs in the U.S. “argue that they have no particular advantage in the renewable energy sector, and that shareholders have plenty of direct ways to hedge or diversify by investing in renewable energy firms.” Also, U.S. oil companies “generally face less pressure from governments and courts than their European counterparts.”

Like IOCs in the U.S. independent exploration and production (E&P) companies focus on their own emissions. They generally have “less management capacity and financial flexibility” to pursue diversification, and have fewer opportunities to transfer skills or find synergies. E&Ps typically have Scope 1 and Scope 2 emissions goals that they set in response to investor pressures. But unlike the IOCs, E&Ps have fewer activist investors targeting them; they also have fewer reputational concerns over climate strategies.

The fourth category of oil & gas companies — government-controlled national oil companies (NOCs) — mostly belong to emerging economies. In oil-exporting countries, they are vital sources of income, especially export income; in oil-importing countries, they are critical to energy security. They are closely aligned with their national priorities and are less sensitive to investor sentiment in the stock markets. Some NOCs do have emissions reduction goals, like Saudi Aramco, which aims to end routine flaring by 2030, but “climate risks are not a first-order concern for most NOCs,” the paper stated.

Amid those different approaches to addressing climate risks, uncertainty surrounds the path U.S. oil and gas companies might prefer. Regulatory uncertainty is among the biggest obstacles for U.S. energy companies compared to their counterparts in Europe. “It is a hodgepodge,” said van Benthem. “Local policies differ across states. Furthermore, they may overlap with federal regulations, and then they change all the time — they’re rolled back and re-enacted. In contrast, the European Union will typically commit to a 10-year plan of what they will do with carbon pricing.”

The prospect of stricter laws in the U.S. to curb emissions is enough to scare off investors. “It is extremely risky to invest in a project that no longer makes sense under stricter carbon regulation,” said van Benthem. “You might sink billions of dollars in a venture that will not work under future regulation.”