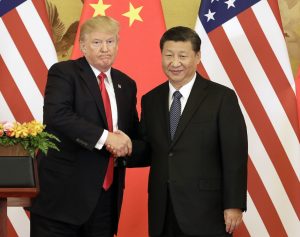 China issued similar threats earlier this year after the US approved arms sales to Taiwan, sanctioned companies over human-rights abuses in Xinjiang and put Huawei Technologies Co. on a blacklist.

“We suggest that the US stops sticking obstinately to its course or China will take resolute countermeasures,” the foreign ministry said. “The U.S. side will bear all responsibility for the consequences.”

Later, foreign ministry spokesman Geng Shuang dodged questions on when China would reply or whether it would impact trade talks, telling reporters to “stay tuned.”

“What will come will come,” he said.

The failure to flesh out the details despite having weeks to prepare shows the difficulties China faces in hitting the U.S. without also hurting its own economy, which is growing at the slowest pace in almost three decades. Apart from implementing retaliatory tariffs against the US, China has largely stuck to a policy of “strategic composure” when it comes to other aspects of the relationship.

Mei Xinyu, a researcher at a think tank under China’s Commerce Ministry, said that the Hong Kong issue will definitely be discussed at the trade negotiation table and China will likely ask the US side to clarify its stance, or even make some promises on refraining from using the bill.

He added that China will prepare some countermeasures at the same time, echoing the Foreign Ministry’s remarks earlier, without elaborating on what specific measures will be taken.

“It’ll bring a certain degree of uncertainty to the ongoing trade talks,” Mei said. “But it won’t necessarily make or break a deal.”

While slowing down the trade talks is the most obvious way China could retaliate, it’s clear that until now Beijing has tolerated a lot just to keep them on track. Without a phase one deal, China faces the prospect of another tariff hike in mid-December.

There are other options, though most of them also carry the risk of backfiring economically.

That’s something President Xi Jinping may not want to risk with economic troubles mounting at home and the Hong Kong unrest showing no signs of abating.

It could hit out at U.S. companies by releasing a long-threatened “unreliable entities” list, stop buying American products, unload Treasuries or curb exports to the U.S. of rare earths, which are critical to everything from smart-phones to electronic vehicles.

On the diplomatic side, China could take measures such as halting cooperation on enforcing sanctions related to North Korea and Iran, recalling the Chinese ambassador to the US or downgrading diplomatic relations. Based on the government’s responses on Thursday, none of those appeared imminent.

“Hong Kong has increasingly become a card in China-U.S. trade war,” E Zhihuan, chief economist at Bank of China (Hong Kong) Ltd, said at a briefing in Beijing. “Now that Trump has showed his card, how we should react tests our wisdom. It’s a very complex and difficult situation.”

Trump himself had little choice but to sign the bills, which required sanctions against any officials deemed responsible for human rights abuses or undermining the city’s autonomy, as well as banning the export of crowd-control items such as tear gas and rubber bullets to the city’s police. Near-unanimous support in Congress meant lawmakers could override a veto, and Trump doesn’t want to give Democrats an opening for attack ahead of the 2020 election.

In signing the bills, Trump signaled to Xi that action wouldn’t be imminent. He expressed concerns with unspecified portions of the new law, saying they risked interfering with his constitutional authority to carry out American foreign policy.

“I signed these bills out of respect for President Xi, China, and the people of Hong Kong,” the president said in a statement Wednesday.

For China, however, the bills represent an interference in their internal affairs and could even encourage protesters who have become increasingly violent in recent months. While the trade talks are separate, the overall relationship could suffer, according to He Weiwen, who previously served as a commercial attache at the Chinese consulates in New York and San Francisco.

“The U.S. has damaged China’s sovereignty and China will of course retaliate,” said He, who is now a senior research fellow at the Center for China and Globalization in Beijing. “Sovereignty prevails over trade for China.”

When asked what China is likely to do, however, He didn’t elaborate.

“I don’t know what specific moves they will make,” he said. “But there will likely be some consequences.”