Transcorp Hotels Plc., which owns Transcorp Hilton Abuja, Transcorp Hotels Calabar and Aura by Transcorp Hotels, has reported a massive 149 percent rise in its gross profit to N10.8 billion on a revenue growth of 115 percent to N14.6 billion for the third quarter ended September 30, 2021, according to its unaudited financial results seen by Business A.M. 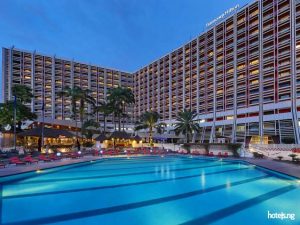 It posted profit before tax of N745 million, a 662 percent improvement on performance recorded for the same period in 2020.

The company also recorded a 31 percent year-on-year growth in its operating expenses which stood at  N7.9 billion in Q3 2021 compared to N6.0 billion recorded in the comparable period of 2020.
In contrast, the company’s interest cost declined 31 per cent  at N3.1 billion in Q3 2021 against N4.5 billion recorded for Q3 2020.
Transcorp Hotels’ statement of financial position showed a positive result as total assets increased by 2.18 percent underpinned by the increase in trade receivables and cash and cash equivalents precipitated by the improvement in business activities within the period.

The company also reported a 3.31 percent increase in total liabilities due to the increase in trade payables because of improved business activities within the period.
In a similar trend, the company’s shareholders fund grew 1.21 percent year-to-date at N61.84 billion compared to N61.10 billion recorded for the 2020 fiscal year.
Commenting on the results, Dupe Olusola, the managing director/CEO  Transcorp Hotels Plc, said the company’s performance reflects the strength of its business to withstand external shocks and continue to grow revenue even in tough economic conditions.
Olusola noted that demand has continued to improve at impressive levels during the year, accelerating in the third quarter to pre-pandemic levels.
“We ended September with 63 percent occupancy, growing from 28 percent achieved in the same period last year, as we continue to outperform the industry average on several indices,” she said.
The managing director also disclosed significant improvement in the company’s corporate and group bookings, as vaccination rates increased, while companies began to return to full operations.
She emphasised that domestic leisure demand remains very strong and continues to be responsible for the improvement seen in the company’s revenue, reflecting its nimbleness and strength of purpose to redefine hospitality in Africa.
Olusola further said Transcorp Hotels is focused on the execution of its growth strategy, leveraging technology and the expertise of its people to deliver best-in-class guest experience across all assets, properties and touchpoints in line with its long-term plans to expand across Africa.
Businessamlive Website Stats