A new visa-on-arrival procedure adopted by the Nigerian Immigration Service has been praised by travel experts who said the NIS should fully implement the new policy. 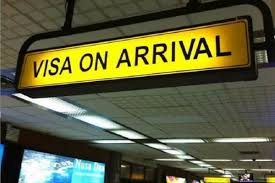 Foreigners coming into Nigeria via Lagos, are in for more scrutiny as the Nigerian Immigration Service (NIS), MurtalaMuhammed International Airport (MMIA) Command, has reviewed the visa-on-arrival procedure.

The review, which took effect at the weekend, mandates all visiting non-Nigerians to either obtain a visa or apply for visa-on-arrival approval before embarking on the trip.

A travel professional, BolajiBinuyo, said the Immigration was apparently trying to live up to their duties, here in Nigeria.

“But if they are just doing that now, what have they been doing all these while? Travellers have been coming here only to begin the process of visa on arrival. But no country allows that. You must have applied and received an approval stating that you are qualified for such status before you begin the trip,” Binuyo said.

Another expert, who preferred anonymity, added that the review might not be unconnected with attempts to discourage paying cash for visa at the airport.

“But the immigration officers should check themselves. Even if you’ve paid overseas for visa-on-arrival, they will still demand for $20 service charge at the airport. Tell them you want to pay via card, they will say there is no network connection. My clients had complained about these many times.

“The new directive is in line with standard travel practices, but the authorities must also curb a lot of shady deals by the officers at the airport.”

The development, which caught many travelers unawares, has led to a situation where operating foreign carriers are rejecting passengers that do not fully comply with the visa-on-arrival processes.

At least five passengers of Kenya Airways, inbound Lagos from Nairobi, were affected at the weekend, as the airline left them behind in Kenya.

Rwandan national carrier, RwandAir, also reported compliance with the new directive, though “it is very painful to say no to our loyal customers that had booked earlier before we got the new directive from Lagos airport,” an official of the airline said.

The MMIA Command of the Immigration, in a letter to all foreign carriers, dated October 16, directed all airlines operating at the Lagos airport not to convey any expatriate that requires Nigerian visa into the country but was yet to either obtain same from an embassy of Nigeria in his or her home country, or get an approval for visa-on-arrival before departure.

The letter signed by the Officer-in-Charge of General Duties, ACI S.U. Agba, on behalf of the Comptroller of Immigration Service, further stated that the directive does not exempt a national of any country from compliance.

The NIS recently launched a new visa-on-arrival application process for all business travellers and African Union countries. The initiative allows visitors coming into Nigeria, to obtain their visa at the point of entry, as part of the Federal Government’s ease of doing business scheme.

Though many passengers were affected by the latest review, stakeholders have described the move as a step in the right direction.