Tunji Funsho, a Nigerian cardiologist, has been named one of TIME’s Most Influential People in the world.

The New York City based international news magazine/website honoured Funsho in its 2020 list of 100 most influential people in the world for his relentless efforts with Rotary International in the eradication of wild polio in Africa. 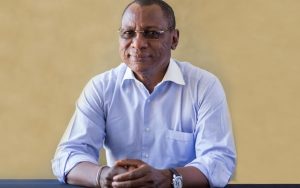 The annual honour list, now in its seventeenth year, recognizes the activism, innovation and achievement of the world’s most influential individuals.

Funsho, a cardiologist based in Lagos, Nigeria, having played an essential role in ensuring Africa’s remarkable certification as wild polio-free in August of 2020, is the first Rotary member to receive this honour which doubles as a recognition of the organization’s work to eradicate polio.

According to TIME, Funsho could have retired as a cardiologist years ago, but in 2013, he “decided to step up” to lead in efforts to eradicate polio from Nigeria and the African continent”.

In reaction to the honour, Funsho stated, “I’m honoured to be recognized by TIME for my part in ensuring that no child in Africa will ever again be paralyzed by wild polio, a disease that once disabled 75,000 African children every single year.

He further disclosed that the eradication of the virus in Africa was a team effort boosted by cooperation and dedication of various governments, partners, Rotary members, thousands of health workers and numerous parents who ensured their children got vaccinated against polio.

The leader of Rotary’s Nigeria National PolioPlus Committee, who doubles as a member of Nigeria’s Presidential Task Force on Polio, has worked tirelessly on various fronts to champion the eradication of polio in Nigeria and Africa in general.

As the leader of Rotary’s Nigeria National PolioPlus Committee, Funsho has worked alongside Rotary members throughout the country to raise awareness about the importance of polio immunization, encouraged governments and public figures to support polio eradication, and served as a vocal leader and advocate for Rotary’s fight to end polio in Africa.

On the international scene, he worked in partnership with the Global Polio Eradication Initiative (GPEI), the World Health Organisation (WHO), and the U.S. Centre for Disease Control and Prevention, among others, in the fight towards a global eradication of the virus.

Currently, the African region, inclusive of Nigeria, has been certified wild polio-free. Other countries in the remaining continents of the world have also been certified polio-free except for Afghanistan and Pakistan who are still battling an endemic of the virus.