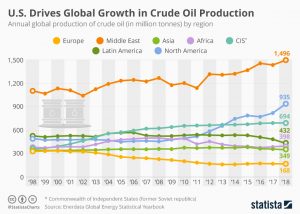 The U.S has emerged as the fastest growing crude oil producing region. This is according to the latest data published by Statista, an online statistics, market research and business intelligence portal.

According to the research firm, crude oil production in the U.S. is rising and might set a new record in 2019. In April, daily production hit 12.2 million barrels, the first time the 12 million mark was surpassed according to the Department of State.

Comparing U.S. performance to global crude oil extraction worldwide, it becomes apparent that North America has been a large driver in the global increase in production. While the Middle East remains the biggest producer by a large margin, the U.S. has been growing its production significantly since 2011. Most of the oil is extracted from shale by a controversial method known as fracking.

The former Soviet Republics and Africa were also able to increased their production, but only by a small margin according to analyst Enerdata. The main users of oil around the world are United States and China, which together use about one third of the world’s supply. The biggest growth in oil demand can also be witnessed in the U.S and China as well as in India.

At this time, crude oil is one of the most present and essential resources in everyday life. The oil industry is one of the most powerful branches in the world economy. More than four billion metric tons of oil is produced worldwide annually. Nearly one third of this amount is generated in the Middle East region. Saudi Arabia and the United States are the world’s leading oil producers, each responsible for around 13 percent of the total global production. Russia is the third-largest producer, generating over 12 percent of the world’s total oil production.

Oil demand and oil consumption have been rising steadily over the last decades. The United States is by far the top consumer worldwide, responsible for approximately one fifth of the total global oil consumption. Correspondingly, the U.S. is the world’s leading oil importer. Nevertheless, U.S. oil consumption has been in constant decline since 2005, while China as the second-leading consumer reported a rapid increase in recent years.

The long-term outlook for the oil industry, however, may be more promising. For example, most of the global top oil producing nations will have distinct higher production maxima in 2020 than in 2011. It is projected that global oil demand will increase until at least 2035. Daily global oil consumption is expected to grow from 89 million barrels in 2012 up to 109 million barrels in 2035. Transportation and industry will continue to be the sectors with the highest demand for oil.