Top U.S. financial regulators assured Treasury Secretary Steven Mnuchin on Monday that markets are functioning normally, according to a person with knowledge of the discussion, despite a recent stock slump that many traders blame on turmoil emanating from the Trump admini 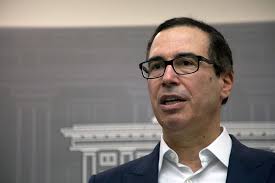 Mnuchin didn’t clear with Trump his decision to convene the meeting of financial regulators before the Treasury secretary announced it Sunday, according  to another person with knowledge of the matter. Nor did he consult the president on a separate decision to ask the nation’s biggest banks about their ability to lend to consumers and other financial companies, the person said.

Both moves added to a sense of alarm among investors already rattled by the report the president had considered dismissing Powell.

The Standard & Poor’s 500 Index slipped by as much 2.2 percent on Monday