Pan-African bank, the United Bank for Africa (UBA) Plc has reposted a growth of 32.3 per cent in its profit after tax (PAT) for the nine months ended September 30, 2019. 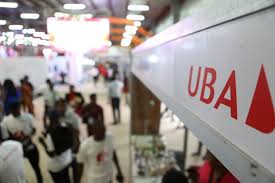 The bank settled for the PAT, which stood at N81.7 billion at the end of the nine month operations into the year, after fulfilling taxation charges obligation of N16.61 billion from the total sum of N98.23 billion recorded as profit before tax (PBT) within the period.

This is contained in the interim consolidated financial statements for the period ended September 30, 2019 just released by the financial institution.

With the performance in the bottom line within the period, the bank’s annualised return on average equity stands at 20.6 per cent.

Despite the double digit inflation rate in Nigeria (its largest market) coupled with uncertainties in the business environment in Nigeria and in some countries in the rest of Africa, UBA’s curtailed operating expenses only increased by 8.4 per cent and this was largely due to regulatory costs.

Commenting on the results, the Group Managing Director/CEO, UBA Plc, Kennedy Uzoka, said: “The resilience of our business model and our focused growth of earning assets have yielded a 10.8 per cent growth in interest income. In addition to the commendable yield on interest earning assets, we also achieved a 22.1 per cent growth in non-interest income, driven largely by the increased penetration of our superior digital banking offerings, credit expansion, remittances and other lifestyle transactional services.

“UBA remains committed to its vision of becoming the undisputed leading and dominant financial services institution in Africa. We will continue to innovate and lead in all our business segments, whilst delivering top-notch operational efficiencies and best-in-class customer service. We are beginning to realise early gains from our ongoing Transformation Program and I am indeed excited about the days ahead,” Uzoka stated.

Also speaking the Group Chief Financial Officer, UBA, Ugo Nwaghodoh said: “With the results achieved in the quarter under consideration, the bank remains on track to deliver its earnings target for the year. We were able to grow the loan book by 14.7 per cent, (well ahead of our guidance) focusing on growth poles of various economies in which we operate.”