US bond yields have responded slightly to the news of China and the United States agreeing to hold high-level trade talks in early October in Washington, amid fears that an escalating trade war could trigger a global economic recession. 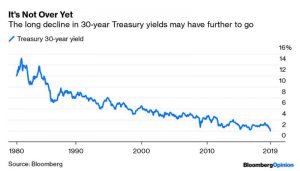 Bond yields moved slightly higher indicating a 2s/10s spread currently at +2bps positive, dragging on safe haven assets like gold and the yen whilst allowing a rebound on risk of the Aussie, sterling and broad equities

There has been a pick-up of sentiment in the past few days which has helped to pull a near term improvement in risk appetite, however, the question is whether these trends are sustainable.

Market traders welcomed the news that the US and China have agreed to meet to discuss trade in October amidst fears that a possible global recession could emanate from the trade dispute between the two countries. At the same time, a few expect do not expect any realistic progress in the trade dispute this side of the 2020 Presidential election.

The news of the early October talks also lifted most Asian share markets on Thursday, raising hopes these can de-escalate the U.S.-China trade war before it inflicts further damage on the global economy.

The talks were agreed to in a phone call between Chinese Vice Premier Liu He and U.S. Trade Representative Robert Lighthizer and U.S. Treasury Secretary Steven Mnuchin, China’s commerce ministry said in a statement on its website. China’s central bank governor Yi Gang was also on the call.

“Both sides agreed that they should work together and take practical actions to create good conditions for consultations,” the ministry said.

Trade teams from the two countries will hold talks in mid-September before the high-level talks next month, the ministry said.

A spokesman for the U.S. Trade Representative’s office confirmed that Lighthizer and Mnuchin spoke with Liu and said they agreed to hold ministerial-level trade talks in Washington “in the coming weeks”.