Stocks in Europe edged lower with U.S. equity futures while Asian shares fell, setting up a lackluster end to a third straight month of increases for major global benchmarks. The dollar was steady. 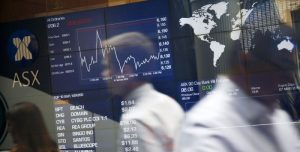 The Stoxx Europe 600 Index pared a decline to trade modestly lower, with gains in media shares partially offsetting losses in miners. Contracts on the S&P 500, Nasdaq 100 and Dow Jones Industrial Average also clipped an earlier drop but still signaled a weak start on Wall Street, where markets will reopen after the Thanksgiving break. All major Asia benchmarks fell, led by a 2% decline in Hong Kong’s HSI Index. U.S. Treasuries edged up as they returned to trading in Asia and Europe.

Investors are hungry for evidence of progress on a Sino-U.S. trade deal, with the next batch of American tariffs on Chinese goods due to begin Dec. 15 and additional tension building over Hong Kong. China’s foreign ministry warned again of unspecified retaliation for U.S. President Donald Trump’s signing of legislation that expresses support for protesters in Hong Kong.

“Markets are on a sort of ‘wait and hold’ in terms of that phase-one trade deal,” David Riley, chief investment strategist at BlueBay Asset Management, told Bloomberg TV. “If there is a skinny deal, that will allow markets and risk assets to grind higher even if there is no real prospect of a phase two or subsequent detailed negotiation occurring this side of U.S. presidential elections.”

Elsewhere, West Texas-grade oil traded around $58 a barrel. The won weakened after the Bank of Korea kept its policy rate unchanged, as expected. The Chilean peso set a record low for a second day and the central bank said it will directly intervene.

These are the main moves in markets: