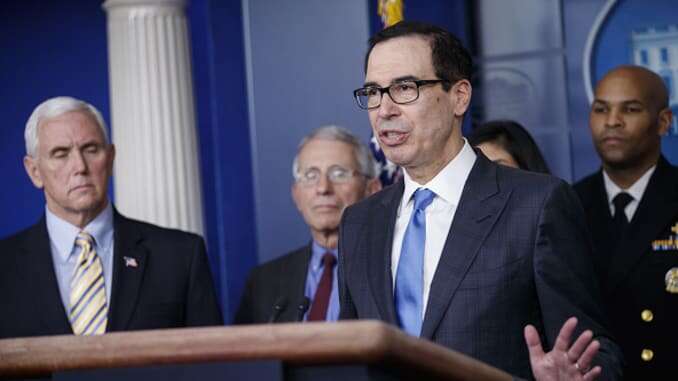 Steven Mnuchin, United States Treasury Secretary, has canvassed an independent investigation into allegations of wrongdoing against Akinwumi Adesina, the president of the African Development Bank (AfDB), despite Adesina’s clearance by the ethics committee of the bank.

The ethics committee headed by Takuji Yano, a Japanese executive director of the bank, had cleared Adesina of all allegations of impropriety and fraud levelled against him by a group that described itself as concerned staff of the bank.

The committee described the allegations that Adesina violated the code of conduct of the institution as “spurious and unfounded.”
But Mnuchin rejected plans by the bank’s board to end the investigation and called for an independent probe into the allegations against Adesina.

It was reported that in a letter dated May 22, 2020, and addressed to the chairperson of the bank’s board of governors,  Niale Kaba, the US Treasury Secretary said the Treasury disagreed with findings by the bank’s ethics committee that “totally exonerated” Adesina.

Kaba confirmed receipt of the document and declined further comment.
The intervention by the treasury, the AfDB’s biggest non-African shareholder, comes two weeks after the ethics committee found no evidence to support allegations of favouritism against Adesina.

The 60-year-old bank chief, who has repeatedly refuted the allegations, is the only candidate up for election as president at an annual general meeting scheduled for August.
“We have deep reservations about the integrity of the committee’s process.
“Instead, we urge you to initiate an in-depth investigation of the allegations using the services of an independent outside investigator of high professional standing,” Mnuchin said.

The US Treasury didn’t immediately respond to an emailed request for comment sent by Bloomberg.
Adesina was accused by a group of unidentified whistleblowers of handing contracts to acquaintances and appointing relatives to strategic positions at the Abidjan-based lender.

“Considering the scope, seriousness, and detail of these allegations against the sole candidate for bank leadership over the next five years, we believe that further inquiry is necessary to ensure that the AfDB’s president has broad support, confidence, and a clear mandate from shareholders,” Mnuchin said.

The US, which became a member of the bank in 1983, has a 6.5 per cent stake in the lender, the largest shareholding after Nigeria, as of November 2019, according to the AfDB’s website.

US criticism of the bank’s internal processes follows comments by World Bank President, Mr. David Malpass, in February, that multilateral lenders, including the AfDB, tend to provide loans too quickly, and, in the process, add to African nations’ debt problems.

The bank rebutted the statements as “inaccurate and not fact-based.”
The AfDB is Africa’s biggest multilateral lender and has an AAA rating from Fitch Ratings, Moody’s Investors Service and S&P Global Ratings.

Its shareholders are Africa’s 54 nations and 27 countries in the Americas, Europe, Middle East and Asia.

In March, the lender issued a $3 billion social bond to help African countries deal with the fallout from the coronavirus pandemic.
Bids for the securities on the London money market exceeded $4.6 billion. The bank also launched a $10 billion crisis-response facility for African nations.

For Africa by Africans! New social media app set to be launched in Africa to rival Facebook

We have no problem servicing Nigeria’s debt – AGF