Global: Global markets traded in a positive manner last week, after multiple sessions of aggressive sell-side action, that was sparked by Russia’s military operation in Ukraine. Starting in Asia, the Japanese Nikkei-225 roared back, rising 6.62% w/w; the buy-side action from investors was fueled by the Bank of Japan’s decision to leave interest rates unchanged at -0.1%. The apex regulator also plans to maintain its stimulus program, keeping the yield on the 10-year bond at 0.0% as the economy grapples with commodity inflation. Other notable markets, such as the Hong Kong Hang Seng Index and South Korean Kospi closed higher w/w, rising 4.18% and 1.72% respectively.

Moving to Europe, we saw markets in Germany, France, and Netherlands post strong w/w performances; the DAX, CAC-40, and AEX all rose 4.74%, 4.71%, and 4.59% respectively. The European economy was the focus of investors this week; On Monday, the Russian Federation banned the exports of grains to the Eurasian Economic Union (EAEU) member states, and the exports of sugar in general. On the economic front, the Bank of England decided to raise interest rates to 0.75%, while ECB President Christine Lagarde stated she expects the crisis in Ukraine to negatively impact the euro area both in terms of inflation and the pace of economic growth. Finally, across the north American region, tech stocks lead all gainers w/w with the Nasdaq Composite up 6.02% at time of writing. Chipmaker NVIDIA was 18.52% w/w helping fuel gains on the index, with EV maker TESLA rising 12.59% and NETFLIX up 10.34% respectively. The Dow Jones and S&P 500 were up 4.64% and 5.27% respectively.

Domestic Economy: In light of the ongoing fuel scarcity, headline inflation rose marginally to 15.70% y/y. While high base effects kept year on year food inflation in check, the core segment reeled from higher energy prices. Going forward, we expect inflation to rise in the near to medium term as fuel scarcity and supply disruptions continue against the backdrop of the Russia-Ukraine crisis.

Equities: The local equites market closed in the red last week, falling 0.33% w/w to close at 47,282.67 points. The easing of global crude prices this week, weighed on sentiment in the market as the Oil and Gas space fell 3.87% w/w, closing as the worst performer. Losses in the space, were driven by sell-side action in Seplat Energy; the firm’s stock price fell 6.06% w/w to close at ₦930/share. The stock had enjoyed strong buy-side action in the year so far, as higher crude prices have boosted investor sentiment in the oil explorer. Meanwhile, the Banking Space fell 0.17% as losses in ACCESS (-3.45% w/w) and ZENITHBANK (-1.30% w/w) weighed on its performance. Moving to the Consumer Goods space, losses in NB (-3.26% w/w) amongst others, saw the sector fall 0.43% w/w; the sector continues to struggle in the face of rising food inflation, as the red close takes its YTD performance to -3.14%. Finally, it was a green close for the Industrial Goods space, as interest in WAPCO (+2.13% w/w) saw the space rise 0.14% w/w. 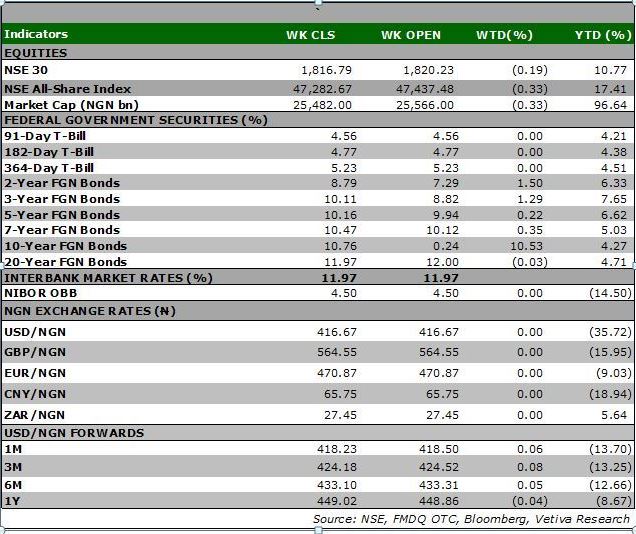 Fixed Income: The secondary market traded in a mixed manner this week, as yields rose in the bond segment. Meanwhile, in the OMO and NTB markets, strong buy-side activity caused yields to trend downwards. In the bond market, selloffs across the curve cause average yields to rise 6bps w/w. While demand in the OMO and NTB space following the PMA auction this week, caused average yield to decline 24bps w/w in both segments.

Equity market: We expect to see a tepid start to next week’s trading, as investors continue to trade in line with the earnings report released into the market. We also anticipate some profit-taking activity on some of this week’s gainers.

Fixed Income: In the week ahead, the bond market should trade on a muted note as investors stay on the side lines awaiting the outcome of the bond auction scheduled for Monday. Meanwhile, we expect the NTB segment to trade in-line with system liquidity.

Core inflation, on the other hand, increased to a 5-year high of 14.01% y/y (Jan’22: 13.87% y/y). The combination of scarce PMS and surging oil prices, which affected the prices of deregulated petroleum products such as diesel and aviation fuel, increased the cost of production in the period. As such, we witnessed a broad-based acceleration in energy, clothing, health, transport, communication, and recreation segments. This underscores the impact of higher energy prices on commodity prices.

Fuel scarcity slows down the pace of food disinflation

Food inflation, on the other hand, slowed to 17.11% y/y, which is slightly lower than January (17.13% y/y). On a month-on-month basis, however, food inflation rose at a faster pace (Feb’22: 1.87% m/m, Jan’22: 1.62% m/m), reflecting the passthrough effect of high transport costs to food prices. Furthermore, because agricultural goods are mostly transported by diesel-powered trucks, the in-creased cost of transportation was exacerbated by higher diesel prices. Staple items such as bread, cereals, and oils, continue to reel from global supply chain challenges and restricted FX access. Imported food also inflation increased 8bps y/y to 17.48% y/y, reflecting the passthrough effect of a weaker Naira.

A year ago, inflation peaked in March as a result of a short-lived food price shock and fuel price hike, which spurred hoarding, mini-fuel queues, and panic buying. This year, the importation of off-spec PMS has resulted in a two-month-long fuel shortage. The current situation, which has been exacerbated by power outages, has the potential to override base effects and rein-force a higher m/m and y/y print. As a result, we expect headline inflation to rise to 15.83% y/y in March.

Concerning the food segment, we see medium-term risks arising from the ongoing Ukraine-Russia tensions. Russia was responsible for 13% of global fertilizer exports in 2020 while the warring countries jointly account for 26% of global wheat exports. Export bans on fertilizers and wheat could negative-ly affect food supply in Nigeria. In the near term, however, we see room for gradual deceleration in food inflation, due to favorable base effects despite nascent pressures from fuel scarcity and higher transport costs. Therefore, we expect food inflation to fall to 17.0% y/y in March.

On the core segment, we envisage further pressures from high energy prices, weak exchange rates, and global supply chain disruptions. As a result, core inflation may touch a new 5-year high of 14.06% y/y.