U.S. stocks slipped on Friday, after three straight sessions of gains, as trade tensions were renewed after Chinese media took a hardline approach to the tariff dispute between the United States and China. 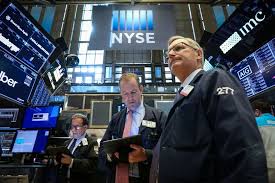 The trade war will only make China stronger and will never bring the country to its knees, the ruling Communist Party’s People’s Daily wrote in a front-page commentary.
Beijing’s higher tariffs on U.S. products on a $60 billion target list will take effect on June 1, which could prompt Washington to go ahead with tariffs on a further $300 billion worth of Chinese goods.
The two sides are expected to meet in China to resume talks soon.
“Mounting trade worries and geopolitical tensions are weighing on investors nerves,” said Peter Cardillo, chief market economist at Spartan Capital Securities in New York.
“The trade war tensions are overcoming the positive in markets so investors are skeptical and markets are caught in a trading range.”
The escalating tensions between the world’s two largest economies led farm equipment maker Deere & Co to cut its full-year forecast, sending its shares down 4.3%.
The drop in shares of Deere, as well as Caterpillar Inc and 3M Co pressured the tariff-sensitive industrial sector, which was trading 0.7% lower.
Technology companies including iPhone maker Apple Inc and chipmakers, which rely on China for a large portion of their revenue, were also hit by trade fears.
Apple Inc fell nearly 1.2% also weighed down by Nomura Instinet’s price target cut on its stock, citing headwinds from the tariff war.
The Philadelphia chip index slipped 0.2%, while the broader technology sector fell 0.4%, weighing the most on the S&P 500.
All three major indexes have posted gains three days in a row this week as upbeat quarterly results and a batch of strong economic data helped ease worries of a global economic slowdown.
The S&P 500 index is now about 3% away from its record high hit earlier this month.
At 9:42 a.m. ET, the Dow Jones Industrial Average was down 90.51 points, or 0.35%, at 25,772.17, the S&P 500 was down 11.56 points, or 0.40%, at 2,864.76 and the Nasdaq Composite was down 36.74 points, or 0.47%, at 7,861.31.
Among stocks, Applied Materials Inc gained 4.9%, the most among S&P companies, after the chip gear maker’s upbeat third-quarter profit eased concerns about waning chip demand.
Under Armour Inc rose 4.6% after JP Morgan upgraded the sports wear maker to “overweight” from “neutral”.
Online scrapbook company Pinterest Inc slumped 13.7% after the recent Wall Street debutant forecast 2019 revenue broadly in line with Wall Street targets.
Also on investors radar is the debut of Luckin Coffee Inc, the Chinese challenger to Starbucks Corp.
Declining issues outnumbered advancers for a 3.56-to-1 ratio on the NYSE and a 2.63-to-1 ratio on the Nasdaq.
The S&P index recorded three new 52-week highs and five new lows, while the Nasdaq recorded 14 new highs and