Wall Street’s main indexes were subdued on Tuesday, as a trade truce-fueled relief rally in the previous session fizzled out after the United States threatened additional tariffs on European goods.
Washington’s proposed tariffs on $4 billion of additional EU goods in a long-running dispute over aircraft subsidies came just as trade tensions with China seemed to be easing and unnerved investors. 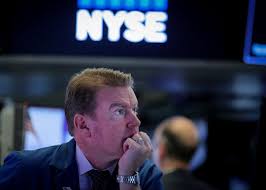 The threat of new EU tariffs adds to the lack of clarity around global trade and will be in the back of investors’ minds, said Eric Wiegand, a senior portfolio manager at U.S. Bank Wealth Management in New York.
Wiegand also said markets could see heightened volatility on Wednesday due to thin trading volumes ahead of the July Fourth holiday.
Adding to the downbeat mood was a clutch of weak manufacturing data from around the world that rekindled global growth fears.
The concerns triggered a drop in crude prices despite an agreement among oil producers to extend supply cuts and pushed the energy sector .SPNY down 1.58%, the biggest drag on markets.
The S&P 500 index .SPX hit a record high on Monday after Washington and Beijing agreed over the weekend to resume trade talks after negotiations broke down in May.
The breakdown had triggered the worst monthly performance this year, but markets have since recouped most of their losses on hopes that the Federal Reserve would be more accommodative to counter a slowing global economy.
Market participants still expect the Fed to cut interest rates at its July 30-31 policy meeting, despite the latest developments in trade talks.
The Dow Jones Industrial Average rose 5.5 points, or 0.02%, to 26,722.93 and the S&P 500  gained 2.04 points, or 0.07%, to 2,966.37.
The Nasdaq Composite added 0.17 points, or 0%, to 8,091.34.
Investors will track the monthly jobs report on Friday, which is expected to show that the private sector added 160,000 jobs in June, after a sharp slowdown in jobs growth in May.
Among stocks, Automatic Data Processing (ADP.O) slipped 4%, after market sources said brokerage Jefferies is re-offering 8 million of the company’s shares at a discount.
L3Harris Technologies gained 3.4%, the most on the S&P 500, after Jefferies added the defense contractor to its top picks for aerospace and defense electronics for the second half of 2019.