U.S. stocks slipped on Monday, dragged down by technology shares, after an unexpected drop in China’s exports in December fanned worries of a slowdown in g 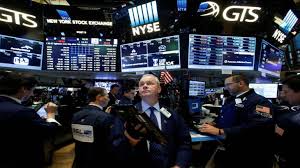 The China trade data reinforced concerns that U.S. tariffs on Chinese goods were taking a toll on the world’s second-largest economy, prompting companies such as Apple Inc to issue profit warning.

Shares of chipmakers, which get a sizable portion of their revenue from China, took a hit, with the Philadelphia SE semiconductor index .SOX falling 1.74 percent.

Shares of trade-sensitive Boeing Co fell 0.89 percent and those of Caterpillar Inc 1.04 percent.

Citigroup Inc kicked off fourth-quarter earnings season for large U.S. banks on a weak note. The bank’s shares, however, reversed premarket losses to trade up 2.28 percent.

JPMorgan Chase & Co and Wells Fargo & Co are set to report their results on Tuesday. The S&P financial sector .SPSY, up 0.37 percent, was the only one among the 11 major S&P sectors trading higher.

Weighing on the benchmark index were technology shares .SPLRCT, which were down 1.17 percent, and consumer discretionary .SPLRCU, which was off 1.73 percent.

Still, the S&P 500 is about 12 percent away from its closing record high hit on Sept. 20 after optimism of China-U.S trade and hopes of a slow pace of interest rate hikes fueled a recent rally in stocks.

Adding to the downbeat mood was a partial government shutdown, which entered its 24th day, making it the longest shuttering of federal agencies in U.S. history.

“The market has just recouped to a level where you are starting to see some profit taking so any concerns relating to China, trade or the government shutdown will probably weigh on the market more than it would’ve last week,” said Robert Pavlik, chief investment strategist and senior portfolio manager at SlateStone Wealth LLC in New York.

“We’re seeing some cautiousness heading into the beginning of earnings season as people are worried about guidance and what companies are going to say, especially in relation to trade.”

Among other stocks, PG&E Corp plunged 48.12 percent after the biggest U.S. power utility said it is preparing to file for Chapter 11 bankruptcy for all of its businesses.

The S&P index recorded no new 52-week highs and one new low, while the Nasdaq recorded seven new highs and eight new lows.