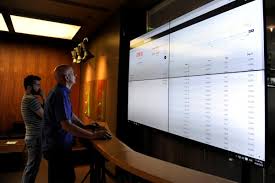 A global measure of equity prices fell to a 1-year low on Thursday as Wall Street extended its October slide into a sixth session as investors feared an escalating U.S. trade war with China and risks from a recent climb in interest rates.

Most sectors in Europe traded in the red, with tech stocks bearing the brunt of selling pressure after the big overnight sell-off in U.S. technology shares.

U.S. consumer prices rose less than analysts had forecast in September, reducing expectations the pace of inflation is accelerating despite a tightening labor market.

Whether the lower reading will quell expectations the Federal Reserve will hike interest rates again in December remains to be seen, said Yousef Abbasi, global market strategist at INTL FCStone in New York.

“The thing people are trying to hang their hat on is a cooler CPI read. That potentially gets us to rally,” Abbasi said.

It will take more than a daily stock market correction to stop the Fed from hiking, said George Goncalves, managing director and head of fixed income strategy at Nomura in New York.

“The market is not necessarily going to take out much from the yield path,” Goncalves said. “I don’t view this as an indication that there’s a turn in the market. I just think it’s natural to see bonds rally after a big equity move.”