Wall Street’s main indexes fell on Monday, dragged down by declines in high-growth technology shares, as fears of a global slowdown roiled the market for the second straight session. 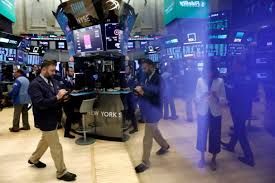 On Friday, weak factory data from the United States, Europe and Japan resulted in the main indexes posting their biggest one-day percentage declines since Jan. 3, and also led to the inversion of U.S. Treasury yield curve for the first time since 2007.

An inverted yield curve is widely seen as a leading indicator of recession.

“Markets are not overcoming concerns of the global economic climate and the fact that the 3-month treasury yields rose above that of the 10-year notes, creating an inversion,” said Robert Pavlik, chief investment strategist and senior portfolio manager at SlateStone Wealth LLC in New York.

“The concerns of global growth, without a China-U.S. trade deal, will linger in the background and continue to weigh on markets.”

Top U.S. officials travel to Beijing for the latest round of high-level talks, which are scheduled to start on March 28.

The technology sector dropped 0.81 percent, weighing the most among the 11 major S&P sectors.

Apple Inc’s shares fell 1.6 percent ahead of an event where the company is widely expected to launch its video streaming service. The event is scheduled to start at 1 p.m. ET.

Investors largely shrugged off Special Counsel Robert Mueller’s report that President Donald Trump’s campaign did not collude with Russia, despite S&P 500 futures initially rising on Sunday. The report left unresolved the issue of whether Trump obstructed justice by undermining the investigations that have dogged his presidency.

The planemaker said it will brief pilots and regulators this week on software and training updates for its 737 MAX aircraft, with Ethiopian Airlines and Qatar Airways expressing confidence in the company despite a recent crash.

Akamai Technologies fell 4.6 percent, the most on the S&P, after a report brokerage Deutsche Bank had downgraded the stock to “sell” from “hold”.

Viacom Inc’s shares rose 5.2 percent, the most on the S&P, after the company renewed a contract with AT&T Inc to continue carrying its services.