U.S. stocks rose on Tuesday, led by a rebound in the battered technology sector, as Federal Reserve Chair Jerome Powell’s said the central bank would act “as appropriate” to trade war risks, leaving the door open for a possible rate cut. 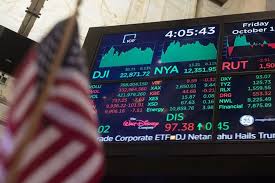 A day after St. Louis Fed chief James Bullard said a rate cut may be warranted soon, Powell said the Fed was “closely monitoring the implications” of a trade dispute that has disrupted global markets and posed risks to growth.
Wall Street’s main indexes have shed more than 6 percent in May on fears of a recession as trade tensions between the United States and China show little signs of easing.
“His comments are not as aggressively dovish as Bullard’s yesterday but he does reiterate the same concerns: trade tensions and low inflation,” said John Doyle, vice president of dealing and trading, Tempus Inc, Washington D.C.
“We are likely seeing the beginning of coordinated Fed-speak to prep market participants for at least one rate cut this year.”
Also lifting the sentiment on Tuesday were comments from Mexico and China.
Mexican President Andres Manuel Lopez Obrador said he expects to reach a deal with the U.S. over immigration before Washington carries out its threat to enact punitive tariffs.
China’s commerce ministry said the differences and frictions with Washington should be resolved through dialogue and negotiations.
The technology sector, which has taken a hit from fears of increased regulatory scrutiny, rose 1.32% and provided the biggest boost to the markets.
High-profile technology companies – Amazon.com, Apple Inc, and Google-parent Alphabet Inc – were up between 0.4% and 1%.
As of Friday’s close, the Nasdaq has lost 10.2% since its May 3 all-time high, confirming a correction territory, while the S&P 500 is 7.6% away from its record high hit on May 1.
At 10:12 a.m. ET the Dow Jones Industrial Average was up 245.72 points, or 0.99%, at 25,065.50, the S&P 500 was up 23.04 points, or 0.84%, at 2,767.49 and the Nasdaq Composite was up 70.57 points, or 0.96%, at 7,403.59.
Interest rate sensitive financial stocks gained 1.38%, the most among the nine major S&P sectors trading higher as U.S. Treasury yields rose.
Advancing issues outnumbered decliners by a 3.37-to-1 ratio on the NYSE and by a 2.70-to-1 ratio on the Nasdaq.
The S&P index recorded 21 new 52-week highs and one new low, while the Nasdaq recorded 22 new highs and 36 new lows.
Businessamlive Website Stats