U.S. stocks inched higher on Thursday driven by Facebook Inc and Boeing Co, adding to gains following a strong start to the quarter, while investors kept a close watch on U.S.-China trade talks. 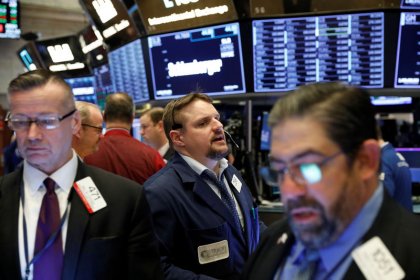 Negotiations continued in Washington after meetings last week in Beijing, as the two countries worked toward resolving their long-standing trade dispute which has cast a shadow over global economic growth.
President Donald Trump, is set to meet Vice Premier Liu He, who is leading the Chinese side in the talks later on Thursday.
“It seems as though this market will continue to stay strong so long as there is some kind of an anticipation of a trade deal,” said Sahak Manuelian, managing director, equities trading at Wedbush Securities in Los Angeles.
Hopes of a trade deal have driven the S&P 500 to a strong start since the beginning of the quarter and it has closed higher all of this week. The index is near its highest since Oct. 10 and less than 2% away from hitting an all-time high.
However, worries about a global slowdown sapped some enthusiasm. Earlier, data showed German industrial orders in February fell at their sharpest rate in more than two years.
That came on the back of U.S. data on Wednesday that showed services sector activity hit a more than 19-month low in March and private payrolls grew less than expected. Investors will get a clearer picture when the Labor Department releases the non-farm payrolls report on Friday.
At 10:09 a.m. ET the Dow Jones Industrial Average was up 130.31 points, or 0.50%, at 26,348.44, the S&P 500 was up 4.82 points, or 0.17%, at 2,878.22 and the Nasdaq Composite was up 13.08 points, or 0.17%, at 7,908.63.
Six of the 11 major S&P sectors were higher, led by a 0.76% rise in the communication services sector.
Facebook rose 2.33%, providing the biggest boost to the S&P 500, after brokerage Guggenheim upgraded the social media company’s stock to “buy” from “neutral”.
Boeing reversed course to trade up 2.4%, contributing the most to gains on the Dow and the S&P industrial index, which rose 0.5 percent. Ethiopian investigators urged the planemaker to review its flight control technology and said pilots of state carrier Ethiopian Airlines had carried out proper procedures in the first public findings on the crash of a 737 MAX 8 jet that killed 157 people.
A big decliner was Tesla Inc, which tumbled 9% after the electric carmaker’s deliveries fell 31% in the first quarter on challenges in shipping to Europe and China.
The Philadelphia Semiconductor index extended its rally from Wednesday to hit a new record high, with a 0.32% gain.
Advancing issues outnumbered decliners for a 1.64-to-1 ratio on the NYSE and a 1.56-to-1 ratio on the Nasdaq.
The S&P index recorded 14 new 52-week highs and one new low, while the Nasdaq recorded 30 new highs and 15 new lows.