Wall Street’s main indexes climbed on Monday, as investors were relieved after the United States abandoned its plans to impose tariffs on Mexican goods. 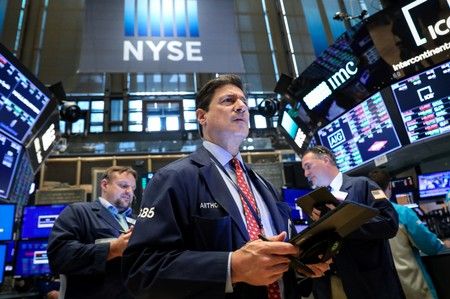 Mexico on Friday agreed to step up efforts to stem the flow of illegal Central American migrants, following threats from U.S. President Donald Trump to impose a 5% import tariffs on all Mexican goods starting Monday.
“Both the U.S. economy and the Mexican economy would have been worse off had the tariffs been imposed,” said David Kass, professor of finance at the University of Maryland.
“Investors are also optimistic today in the hope that the trade war with China will also be resolved in the near future,” Kass said.
U.S. automakers, which have long built vehicles in Mexico, traded higher, with General Motors Co gaining 2.4% and Ford Motor Co 1.1%. Corona beer maker Constellation Brands, which has significant Mexico exposure, was up 2.4%.
Technology stocks rose 1.5% and provided the biggest boost among the nine major S&P sectors trading higher.
Large-cap companies, including Apple Inc, Microsoft Corp, Amazon.com and JPMorgan Chase, rose between 2% and 3.5% and bolstered the markets.
However, shares of United Technologies Corp and Raytheon Co came under pressure after Trump said he was a “little concerned” about their merger as it could take away competition in the sector.
The two companies on Sunday agreed to merge to create a new firm worth about $121 billion. United Technologies Corp was down 2.3%, while Raytheon Co was up 2.1%.
At 10:24 a.m. ET, the Dow Jones Industrial Average was up 165.45 points, or 0.64%, at 26,149.39. The S&P 500 was up 21.58 points, or 0.75%, at 2,894.92 and the Nasdaq Composite was up 112.88 points, or 1.46%, at 7,854.98.
Only the defensive utilities and real estate sectors were trading lower.
Other gainers included chemical marker LyondellBasell Industries, which rose 5.9% following a 37 million share buyback program on Monday.
Kraft Heinz Co gained 5.3% after the packaged food company said the numbers it restated last month were accurate following completion of an internal investigation.
Salesforce.com Inc slid 4.5%, the most among S&P companies, after the cloud-based services provider said it would buy big data firm Tableau Software for $15.3 billion. Tableau jumped 34.7%.