U.S. stocks rose for the first time this week on Thursday, as President Donald Trump said trade talks with China are doing well, offering a glimmer of hope to markets roiled by trade tensions. 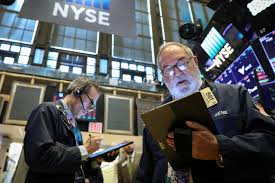 A senior Chinese diplomat said that provoking trade disputes is “naked economic terrorism”, even as Trump said Beijing wanted to make a deal with Washington.
The escalating trade war has weighed heavily on Wall Street, putting its main indexes on track for a monthly loss of more than 5% in May. The benchmark S&P 500 is now 5.7% away from its all-time high of 2954.13 hit on May 1.
“People are trying to figure out how much of the bad news is already priced in. The trade war looks like it might dampen growth but not enough to throw us into a recession,” said Scott Brown, chief economist at Raymond James in St. Petersburg, Florida.
“There has been talk about the Fed possibly cutting rates and that is a little bit positive for the stock market.”
Despite a tick up in U.S. treasury yields on Thursday, they were still at 20-month lows as investors sought safety in government bonds.
The yield curve between three-month bills and 10-year notes also remained inverted and money markets were pricing in roughly two U.S. rate cuts by the start of next year. [US/]
The technology sector, among the worst performing S&P sectors this month, rose 0.60%, and provided the biggest boost to markets.
The sector was helped by a 11% jump in shares of Keysight Technologies after the electronic measurement equipment maker’s quarterly results topped estimates and the company announced a $500 million share buyback program.
Apple Inc, Microsoft Corp and Intel Corp rose between 0.3% and 1.3%, supporting the markets.
At 9:42 a.m. ET the Dow Jones Industrial Average was up 74.96 points, or 0.30%, at 25,201.37. The S&P 500 was up 12.02 points, or 0.43%, at 2,795.04 and the Nasdaq Composite was up 32.96 points, or 0.44%, at 7,580.27.
Nine of the 11 major S&P sectors were trading higher, with only the energy and communication services sectors in the red.
Adding to the upbeat mood, the government confirmed domestic economic growth accelerated in the first quarter, but there are signs that the temporary boost from exports and inventory accumulation is already fading, and production at factories slowing.
Among other stocks, Citigroup Inc rose 1.4% after Goldman Sachs raised the bank’s shares to “buy”, as it expects the lender to achieve a higher return on equity in 2020.
Discount retailer Dollar General Corp jumped 6.2% after the company reported quarterly same-store sales and profit above expectations.
PVH Corp tumbled 12.1%, the most among S&P companies, after the Calvin Klein owner cut its annual profit forecast as it grapples with tariffs and slowing retail growth.
Advancing issues outnumbered decliners by a 3.25-to-1 ratio on the NYSE and by a 2.48-to-1 ratio on the Nasdaq.
The S&P index recorded no new 52-week high and six new lows, while the Nasdaq recorded eight new highs and 26 new lows.