U.S. stocks extended gains in a broad-based rally on Friday, as a sharp slowdown in May domestic job growth raised hopes of an interest rate cut, while the United States’ decision to delay tariffs on Chinese goods lifted the mood. 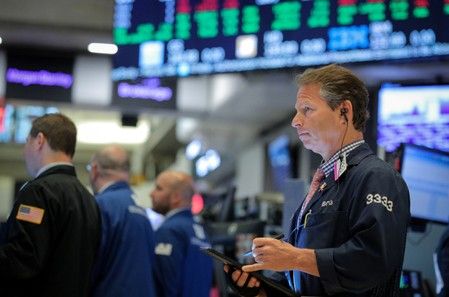 A Labor Department report showed nonfarm payrolls increased by 75,000 jobs last month, much smaller than the 185,000 economists polled by Reuters had forecast, suggesting the loss of momentum in economic activity was spreading to the labor market.
“This is the type of read the doves will really take to, as it supports the argument for cutting rates beyond politics or trade issues, which were never part of the Fed’s mandate to begin with,” said Mike Loewengart, vice-president of investment strategy at E*Trade Financial in New York.
“Even though the number came in low, we’re still creating jobs, which supports the case that the economy is still expanding, so the Fed will have to walk a really thin line.”
The sign of cooling in the labor market led traders of short-term interest rate futures to add to bets that the Federal Reserve will start to cut rates in July and reduce them two more times before the end of the year.
Expectations that the Fed would turn more accommodative to blunt the impact of escalating trade tensions have set the S&P 500 to post its fourth straight sessions of gains and also put the benchmark index on track for its first weekly gain since May 3.
The interest-rate sensitive banking index dropped 0.47%, while the broader financial sector fell 0.04%, and was the only S&P sector trading lower.
U.S. officially granted Chinese exporters two more weeks to get their products into the country before increasing tariffs, according to a U.S. government notice posted online.
Tariff-sensitive Boeing Co and Caterpillar Inc rose about 1%, while industrial stocks gained 0.52%.
On the tussle with Mexico, a senior White House official said if talks continue to go well President Donald Trump could decide not to move forward with the tariffs on Mexican imports on Monday.
At 9:42 a.m. ET, the Dow Jones Industrial Average was up 183.65 points, or 0.71%, at 25,904.31 and the S&P 500 was up 22.23 points, or 0.78%, at 2,865.72. The Nasdaq Composite was up 77.49 points, or 1.02%, at 7,693.05.
The defensive consumer staples sector, real estate and utilities rose about 0.7%, the most among the sectors.
Defensive stocks are seen as bond proxies and do poorly when interest rates and bond yields are on the rise.
Beyond Meat Inc shares surged 25.9% after the maker of plant-based burgers and sausages said it expects to more than double its revenue and report breakeven EBITDA this year.
Caesars Entertainment Corp rose 3.7% after the Wall Street Journal reported that the company was nearing a deal to combine with rival Eldorado Resorts Inc.
Advancing issues outnumbered decliners by a 4.49-to-1 ratio on the NYSE and by a 2.46-to-1 ratio on the Nasdaq.
The S&P index recorded 95 new 52-week highs and no new low, while the Nasdaq recorded 65 new highs and 27 new lows.