Wall Street fell more than 1 percent on Thursday, as tensions heated up ahead of a make-or-break U.S.-China trade meeting, which could lead to a prolonged dispute that would threaten global financial markets and economic growth. 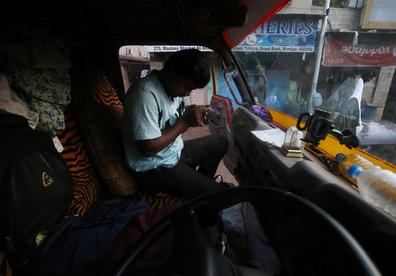 U.S. President Donald Trump vowed not to back down on imposing new tariffs unless Beijing “stops cheating our workers”, as two-day talks begin in Washington on Thursday.
China has threatened to retaliate if tariffs on $200 billion worth of Chinese goods increase to 25% on Friday, rekindling worries of a worldwide economic slowdown and triggering flight to safety among investors.
“All this macro uncertainty out there is making investors risk-averse particularly in an environment that isn’t great,” said Michael Geraghty, equity strategist at Cornerstone Capital Group in New York City.
“It is highly unlikely that after months and months of negotiations, that suddenly over the course of two days all these trade issues could be resolved.”
The benchmark S&P 500 index fell below its 50-day moving average, a closely watched level of near-term momentum, with all the major sectors lower.
The technology sector posted the steepest declines, slipping 1.96%, dragged down by a drop in shares of iPhone maker Apple Inc and chipmakers, which get a large portion of their revenue from China.
The Philadelphia chip index declined 2.89%, also pressured by a modest profit growth forecast from Intel. The index has fallen 7.6% so far this week, and is on pace to post its biggest percentage weekly loss since Jan. 2016.
Trade-sensitive industrial bellwethers were also hit, with Boeing Co, Caterpillar Inc and 3M Co down about 2%.
Meanwhile, data showed U.S. goods trade deficit with China, a focus of the Trump administration’s “America First” agenda, dropped to a five-year low in March amid a surge in exports, including soybeans.
The CBOE Volatility Index, a gauge of investor anxiety, rose to its highest level in four months.
At 10:54 a.m. ET, the Dow Jones Industrial Average was down 376.59 points, or 1.45%, at 25,590.74. The S&P 500 was down 34.40 points, or 1.19%, at 2,845.02 and the Nasdaq Composite was down 116.81 points, or 1.47%, at 7,826.51.
In a bright spot, Tapestry Inc jumped 10.6%, the most among S&P companies, after the Coach handbag maker beat quarterly profit estimates and announced a $1 billion share buyback plan.
Chevron Corp climbed 2.1%, and was among the only gainers on the Dow, after the oil major said it would not raise its $33 billion offer to buy Anadarko Petroleum Corp.