New orders for U.S.-made capital goods fell more than expected in April, further evidence that the economy was slowing after a growth spurt in the first quarter that was driven by exports and a buildup of inventories. 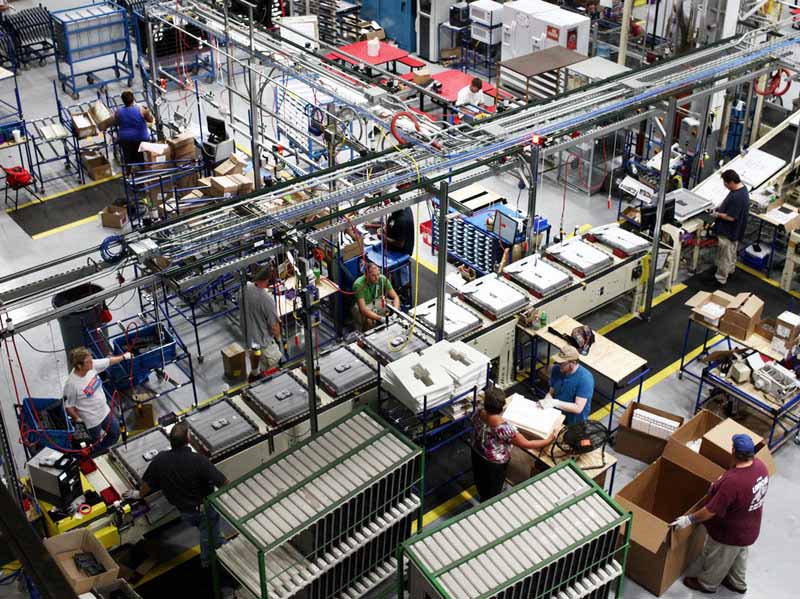 The report from the Commerce Department on Friday also showed orders for these goods were not as strong as previously thought in March and shipments were weak over the last two months, indicating that manufacturing was fast losing ground.

The sector, which accounts for about 12% of the economy, is being squeezed by businesses placing fewer orders while working off stockpiles of unsold goods in warehouses. The inventory overhang is concentrated in the automotive sector, which is experiencing slow sales. Boeing’s move to cut production of its troubled 737 MAX aircraft is also hurting manufacturing.

The loss of momentum came even before a recent escalation in the trade war between the United States and China, leading economists to expect demand for capital goods to remain soft.

The renewed trade tensions between Washington and Beijing have roiled the U.S. stock market. Data on Thursday showed a measure of factory activity hit an almost 10-year low in May.

“We can’t sugar-coat today’s news,” said Chris Rupkey, chief economist at MUFG in New York. “Business investment is absolutely critical for the economy to move forward and investment is normally the swing factor that pumps up growth or pulls out the support from the economy.”

Orders for non-defense capital goods excluding aircraft, a closely watched proxy for business spending plans, dropped 0.9% last month as demand softened almost across the board. These so-called core capital goods orders rose 0.3% in March instead of 1.0% as previously reported.

Shipments of core capital goods were unchanged last month after a downwardly revised 0.6% decline in the prior month. Core capital goods shipments are used to calculate equipment spending in the government’s gross domestic product measurement.

They were previously reported to have slipped 0.1% in March. Friday’s report followed data this month showing weak retail sales, industrial production and home sales that prompted economists to slash GDP growth forecasts for the second quarter.

The economy grew at a 3.2% annualized rate in the first quarter, but the downward revision to March core capital goods shipments suggests business spending on equipment was even weaker than initially estimated during the quarter. That could result in the January-March GDP growth estimate being trimmed when the government publishes its revision next week.

JPMorgan on Friday cut its second-quarter growth estimate to a 1.0% rate from a 2.25% pace. Growth is mostly slowing as last year’s massive stimulus from the Trump administration’s tax cuts and spending increases fades.

The dollar slipped against a basket on currencies in thin pre-holiday trade. U.S. Treasury prices dipped, while stocks on Wall Street were trading higher. U.S. markets are closed on Monday for the Memorial Day holiday.

Economists said the raft of weak data, uncertainty over the trade war and sluggish global growth could force the Federal Reserve to cut interest rates.

“We had previously expected the next move from the Fed would be a hike, albeit at the very end of our forecast horizon in late 2020,” said Michael Feroli, an economist at JPMorgan in New York. “We now see the risks of the next move as about evenly distributed between a hike and a cut.”

Overall orders for durable goods, items ranging from toasters to aircraft that are meant to last three years or more, tumbled 2.1% in April after increasing 1.7% in the prior month. Orders for transportation equipment dropped 5.9% after rising 5.9% in March. Orders for motor vehicles and parts decreased 3.4% last month, the most since May 2018.

Orders for non-defense aircraft plunged 25.1% after rising 7.8% in March. Boeing reported receiving only four aircraft orders in April, down from 44 in March.

All of the orders last month were for the company’s fastest-selling MAX 737 jetliner, which was grounded in March after two fatal plane crashes in five months. Boeing has also suspended deliveries of the aircraft.

“That does not bode well for future production,” said Joel Naroff, chief economist at Naroff Economic Advisors in Holland, Pennsylvania.

“It is becoming clear that whatever boom the tax cuts may have created, if they did much at all, is largely gone.”

The Chinese government has promised to open wider trade relationship with Nigeria, in spite of the reported trade dispute it has with the United States.

Zhou Pingjian,  China’s ambassador to Nigeria, gave the promise at a lecture organised by the Chinese Embassy which held in Abuja on Friday. He said although China and U.S. were the top two economies of the world, the trade dispute between them would not in any way deter existing relations with Nigeria.

According to him, in spite of global concerns about trade talks between China and the U.S., more would be done to sustain China-Nigeria cooperation.

“We will definitely be open wider and wider because from our own experience, we firmly believe openness brings progress, while self seclusion leaves one behind.

“There have been concerns about trade talks between China and the United States and industrialisation of Nigeria and this and that is only imagined. We understand the concerns, China and Nigeria are on very good terms and we can do a lot of cooperation,” he said.

He decried the escalation of the trade dispute provoked by the U.S., adding that what China has done is raise defence to protect the country’s legitimate trade rights. He said that U.S. raised trade tariffs and further resorted to maximum pressure in international trade transactions.

He explained China and the U.S. reached trade consensus in May, 2018 in the state of Washington DC, and also on value of China’s purchases in the U.S. in December, but was rejected.

He, however, assured that China would continue to carry out business with Nigeria and other countries of the world in line with mutual trade policies, to achieve economic growth.

Meanwhile, in separate interview, Austin Amadi, a student, said that the commitment on the part of China would go a longer way to sustain its relationship with Nigeria.

According to him, the people that will sustain such relationship are the youths, who are future leaders. “If there must be sustainability to this cooperation, accord and unity, students who as tomorrow leaders must be tutored early enough, to achieve targets,” Amadi said.