“That’s for Ann Taylor, that’s for Gap,” said Janghala, the factory head, before stopping to pick up a white dress. “This is for J. Crew. This is all value added. This is all cut by hand.”

The 4,000-person factory outside of New Delhi is just one of Orient Craft’s 26 facilities in India, which together export nearly 250,000 pieces of clothing a day — more than 60 percent of which flow to the U.S. Annual revenues at the closely held company have grown steadily to more than $300 million.

It’s just one example of how Asia’s export engines are motoring again. 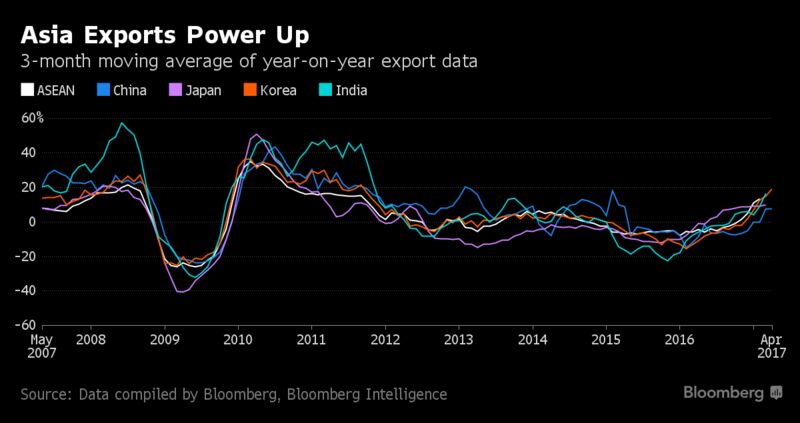 Buoyed by U.S. and European demand, shipments of everything from South Korean cars to Indian t-shirts have pushed exports from Asia to their highest levels to multi-year highs. Sleek smart-phone upgrades planned by Apple and Samsung are also helping as Chinesemanufacturers hoover up components from around the region to build the handsets.

The trade rebound is happening amid worries over rising protectionism and a still fragile outlook for the world economy that raises the question: how long can the good times last.

Asia’s exporters are in the cross hairs of U.S. President Donald Trump’s vow to boost U.S. jobs by reducing imports. Of the 16 countries facing scrutiny from Trump’s 90-day review of possible “trade abuse,” more than half are in Asia with the biggest bilateral trade surpluses chalked up in the region by China, Japan, Vietnam and South Korea. China’s easily ranked as the largest at $327 billion in 2016. Although Trump has reined in some of his criticism of trading partners, the threat of heightened trade tensions hasn’t gone away. 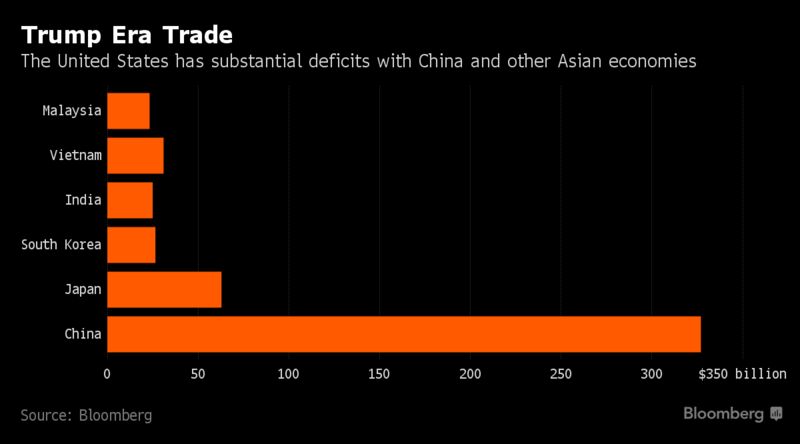 “Our base case is that this is going to be a bigger issue next year than this year, especially between the U.S. and China,” said Rob Subbaraman, chief economist for Asia ex-Japan at Nomura in Singapore.

Orient Craft, the Indian garment exporter, is among those watching developments carefully.

Sudhir Dhingra, who founded the firm in 1972, has seen his exports to the U.S. grow to $181 million in 2016 from $129 million in 2012, according figures supplied by the company. But with Trump and Brexit darkening the global prospects of freer trade, Dhingra said he expects countries to pursue simpler bilateral deals than grand regional free trade agreements as politicians realize that bringing jobs back home to high-cost labor markets isn’t so simple.

“The U.S. under Trump could impose some additional duties, that’s a worry,” Dhingra said. However, “people will find out that you can’t move everything back home. People won’t pay those prices.”

In annual outlook released Tuesday, the International Monetary Fund projected Asia will grow 5.5 percent in 2017 compared with 5.3 percent last year, though it warned that downside risks could include rising trade barriers.

Other worries include signs that China’s economy may be slowing as authorities clamp down on excessive credit, meaning demand for commodities will soften and hurt producers such as Australia and Indonesia. Some cooling in the U.S. economy is also weighing sentiment.

For Asia, exports matter. The region is the world economy’s fastest growing economy –accounting for around 30 percent of global growth — and one that relies heavily on trade.

While some of the improving trade reflects higher prices for commodities and electronic parts, underlying demand is picking up too.

Exports from China, the world’s biggest trading nation, held up in April after hitting a two-year high in March. South Korea’s exports expanded for a sixth month in April, contributing to the biggest trade surplus in decades. Japanese exports grew at the fastest rate in more than two years in March.

India’s merchandise export growth was up 4.7 percent in the fiscal year ending March 2017, after a drop of 16 percent in the previous fiscal year. India is now poised for a year of accelerating trade growth, according to Bloomberg Intelligence.

To be sure, it’s not all one way traffic. U.S. services exports to Asia are rising and a burgeoning middle class in Asia offers huge potential. American exports to South Korea rose to a record in February and the nation’s year-to-date deficit with China has fallen by 2.5 percent.

That emerging demand could be the start of a trend, according to Parag Khanna, a senior research fellow at the Lee Kuan Yew School of Public Policy at the National University of Singapore.

“Asian economies are not just about manufacturing or commodities any more,” said Khanna “There is a strong services and consumption vertical emerging.”

The data show global trade may be about to pull out of its doldrums. The IMF last year estimated world trade volumes grew a little more than 3 percent a year since 2013, less than half the average expansion rate over the prior three decades.

“Asian economies are set to be major beneficiaries,” said Edith Terry, author of How Asia Got Rich: Japan, China and the Asian Miracle.