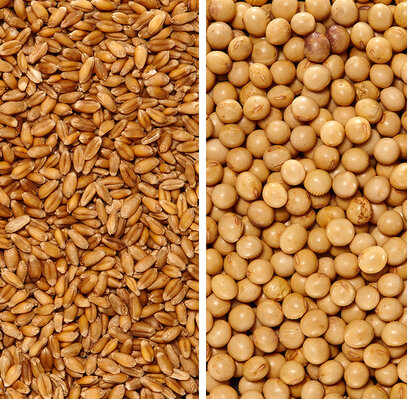 U.S wheat and soybean futures have risen to multi-year highs but hostile weather conditions are threatening production in major exporting countries.
The U.S enjoyed a boost in its wheat exports to China as it recorded $2.15 billion in August, a record high which was also complemented by strong soybean exports. However, the impending weather  condition and dryness has raised concerns among traders and farmers about the prospects for wheat planting in the U.S plains and for soybean planting in Brazil.
According to weather forecasts, weather in the southern U.S plains wheat belt is likely to remain dry over the next six to ten days with temperatures to stay above average.
Jacqueline Holland, market analyst for Farm Futures believes that dry planting conditions in the U.S, Russia and Ukraine, as well as dry growing conditions in Argentina is certain to weaken yield prospects around the globe.
The harsh weather condition and its effect on crop was further analysed by Tomm Pfitzenmaier, analyst for Summit Commodity Brokerage in Iowa, U.S who stated that the strong Chinese demand for U.S soybean has been driving prices, but on Wednesday, the trade began to talk about the concerns about the American crop in earnest.
Traders assert that delayed soybean plantings and harvests in Brazil could extend the export season for US soy on the global market as both countries compete for sales to China, the world’s highest soybean importer.
Businessamlive Website Stats