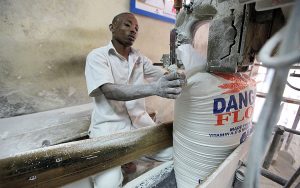 The delisting marked the formal conclusion of the acquisition of DFM by Crown Flour Mills, a subsidiary of Olam International Limited.

As part of the acquisition agreement with Olam, DFM must delist from the NSE and return a private limited liability company, wholly owned by Crown Flour Mills, Olams sunsidiary in Nigeria.

From a modest start as a division of Dangote Industries Limited in 1999, DFM was incorporated and commenced operations as a public limited liability company on January 1, 2006.

It listed on the NSE in 2008 and Alhaji Aliko Dangote’s Dangote Industries Limited (DIL) owned the majority equity stake.

At their held in Lagos in October, 2019, shareholders of DFM had approved the scheme of arrangement transferring DFM’s shares to Olam at a price of N24 per share.

They also approved a resolution affirming Olam as the legal beneficial 100 per cent owner of DFM after the transfer of the shares.

This marks the second time Dangote will be selling DFM.

However, Tiger Brands was unable to unlock the assets and faced with the dire situation of outright liquidation and bankruptcy, Tiger Brands Limited on December 11, 2015 reached agreement with DIL to resell the troubled flour-milling company to DIL, while the latter got the company back o its feet.