The rash of commissioning of projects and flagging off of new ones by Governor Nyesom Wike in Rivers State within the last six years demonstrate prudent management of resources and visionary leadership, said Paulinus Nsirim, the state Commissioner for Information and Communication. 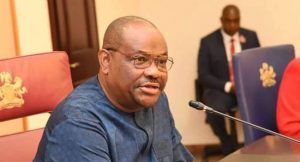 “Given the economic downturn, others of his contemporaries are complaining of the downturn, (but) Governor Wike is commissioning projects and flagging off new ones; it is a demonstration that he is a visionary leader and prudent manager of resources,” Nsirim said while receiving an award in Abuja on behalf of his boss.

Last Sunday 30 May at a thanksgiving to mark his administration’s sixth anniversary, Wike announced the approval to construct the tenth flyover bridge in Port Harcourt, the state capital. There are a number of other roads, including the historic first landfall at Bonny Island, home to Nigeria’s multi-billion-dollar LNG plant. The road leads to Bodo, heart of oil-rich Ogoni land. Others are: Bori-Sakpenwa-Kono road, roads in Etche, Ishiokpo, Emohua, Abua Odual, among others. The governor had also built educational, healthcare and judiciary infrastructure, including the expansion of academic programmes with new satellite campuses of the State University (RSU) in Emohua, Ogoni, Etche, among others.

Late last year, Nsirim had said the vast projects, including the flyover bridges being erected across the oil-rich state by the governor were aimed at attracting investors into the state, thereby grow its GDP.

Rivers, an oil-rich state with a GDP in excess of $33.69 billion as of 2016, currently runs among Nigerian sub-nationals with high unemployment rates. Data from the National Bureau of Statistics (NBS) show that in quarter four of last year (Q4 2020), its unemployment rate was 41.59 per cent and underemployment of 17.63 per cent. With a population of 5.35 million, the state has a labour force of 3.94 million, with 1.64 million of this number going without employment.

Meanwhile, the main opposition party in the state, All Progressives Congress (APC) had severally criticised the governor’s multi-billion-naira projects as more ‘impressionistic’, and lacking ingredients for inclusive economic growth.

The party quickly pointed to the governor’s neglect or discontinuing of previous large-scale agriculture projects such as: the Songhai Farms in Ogoni, Buguma and Ubima Fish Farms, Banana Farm, and then popular Rivers State Sustainable Development Agency (RSSDA) which had generated several employment-generating projects, including academic scholarships.