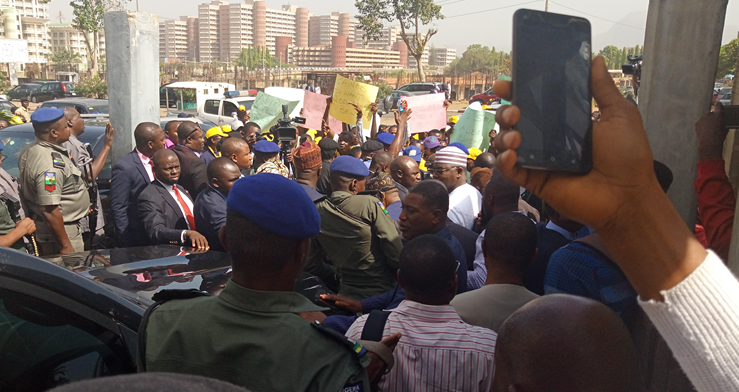 To demonstrate their strong opposition to the planned fiscal measure, hundreds of the workers in a protest barricaded federal ministry of finance’s entrance gate for hours.

Led by Comrade Ayo Olurunfemi, the protesting workers made vehicular and human access to and from the ministry totally impossible people, particularly the Minister of Finance, Budget and National Planning, Mrs zainab Ahmed, the Minister of State, Budget and National planning, Prince Clem Agba; the Information and Culture Minister, Lai Mohammed, and othet top government officials to exit the premises after the Ahmed had gave a breakdown of 2020 budget.

Olurunfemi, while speaking with journalists at the entrance of the ministry, accused the Finance Minister of causing inter-agency rivalry and disunity.

He alleged: “The action of the minister is unfortunate, unhealthy and inimical to the ideals preached by this administration and if not checked, it is capable of causing inter-agency disunity and unhealthy rivalry even now when all hands must be on deck to uplift the nation.

“We are particularly surprised that the minister is bent on taking over a mandate that was globally assigned to postal services.

“From the argument of the minister, it follows that if stamp duty is a form of taxation, it’s collection should be ceded to the FIRS. Does that mean that Nigeria customs which also collect various duties will also have their functions reverted to FIRS?

“Of course if we permit the evil as perpetrated, the roles of customs service, Nigeria ports authority, Standards Organisation of Nigeria, and all revenue collecting agencies will eventually be ceded to FIRS under the highly powerful Minister of Finance”, the labour leader added

Olurunfemi vowed that the union would not allow what he described as injustice to prevail on the proposed ceding of the Stamp Duty collection to FIRS lest it will be replicated in other revenue generating agencies.

He pointed out that migrating from production of adhesive stamps to electronic payment production cannot mean change of the NIPOST mandate, adding that the agency has projected a N500 billion revenue collection for the government in 2020 even when government projected N400 million revenue from the source in the fiscal year.

He expatiated: “We in the agency have estimated a N500billion revenue collection and by virtue of who collects more, we should be allowed to collect and get our 5percent cost of collection. No agency has the capacity NIPOST has such as facilities across the country, even to rural areas, to improve government’s financial literacy policy.”

Addressing the protesting workers subsequently, the Finance Minister, urged them to document their grievances and present to her for further engagements, pointing out that government’s aim is to ensure that more revenue is generated to its coffers.

It would be recalled that part of the recently passed Finance Bill had ceded Stamp Duty collection to the FIRS, a provision the aggrieved workers are now contesting.