Governments, including Nigeria, other African countries and international institutions are sorely unprepared for an impending widespread of epidemic-prone diseases like Ebola, influenza and SARS, which are set to hit the world soon, says a just-released first report of the Global Preparedness Monitoring Board (GPMB) in New York.

Co-chaired by Gro Harlem Brundtland, former prime minister of Norway and former World Health Organisation (WHO) director-general) and Elhadj As Sy, director-general of the International Federation of the Red Cross and Red Crescent, the GPMB is an independent group of global experts who are using their profiles and knowledge to try and lessen the impact of future health emergencies by making sure the world is properly prepared. 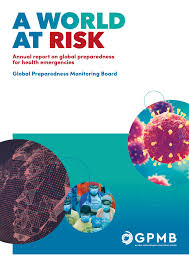 The report which was directly made available to business a.m. by GPMB media team, said: “At the same time, the threat of a pandemic spreading around the globe is a real one – a quick-moving pathogen has the potential to kill tens of millions of people, disrupt economies, and destabilize national security. Climate change, urbanization, and a lack of adequate water and sanitation are all breeding grounds for fast-spreading, catastrophic outbreaks.

“Despite the increasingly dire risk of widespread epidemics, the world remains unprepared. The Global Preparedness Monitoring Board (GPMB) warns that epidemic-prone diseases like Ebola, influenza and SARS are increasingly difficult to manage in the face of prolonged conflict, fragile states, and forced migration,” the report noted.

Brundtland lamented that, for too long, world leaders’ approaches to health emergencies have been characterised by a cycle of panic and neglect. “It is high time for urgent and sustained action. This must include increased funding at the community, national and international levels to prevent the spread of outbreaks. It also requires leaders to take proactive steps to strengthen preparedness coordination mechanisms across governments and society to respond quickly to an emergency.”

Meanwhile, the World Bank acting chief executive, Axel van Trotsenburg, warns that there is direct correlation between poverty and disease.

“Poverty and fragility exacerbate outbreaks of infectious disease, and help create the conditions for pandemics to take hold. Investing in stronger institutions and health systems will promote resilience, economic stability and global health security,” the global lender boss said. The World Bank is a co-convener of the GPMB along with WHO.

The above World Bank assertion clearly puts Nigeria on notice, as the country currently posts the unenviable record as the world’s poverty capital, with 87 million extremely poor people.

The GPMB report notes the following: a heightened risk of pandemics; disease outbreaks are on the rise; current efforts to prepare for outbreaks are grossly insufficient, with world leaders caught in a cycle of panic and neglect, ramping up efforts when there’s a serious threat then forgetting about them when the threat subsides; an outbreak could emerge naturally, but there is also risk of an accidental or deliberate release by rogue actors, which would complicate an effective response; too many world leaders and global institutions see emergency preparedness as purely medical, when the Ebola crisis in DRC demonstrates that the response must also be political and social; the world is confronted by increasing disease outbreaks, with the poorest countries hit the hardest; climate change, urbanization, and a lack of adequate water and sanitation are all breeding grounds for fast-spreading, catastrophic outbreaks.

The report emphasizes that although governments and international institutions have taken steps to increase preparedness for outbreaks since the deadly Ebola crisis in West Africa five years ago, current preparedness efforts are grossly insufficient. The current Ebola outbreak in the Democratic Republic of the Congo demonstrates how the lack of trust between communities and authorities can undermine the response during a health emergency. By contrast, after people infected with the virus crossed the border to Uganda this past summer, public health authorities, health care workers, and community volunteers were at the ready, with a preparedness plan in place. The cases were quickly detected and isolated before anybody else could be infected.

Elhadj As Sy, the secretary general of the International Federation of Red Cross and Red Crescent Societies, co-chair of GPMB also said: “The trust between communities and the institutions that serve them is at the core of an emergency response, but it is almost impossible to build trust in the middle of a crisis. Community engagement and trust cannot be an afterthought, it has to be earned. Leaders and public health authorities must work as partners with communities to build that trust. We can’t just show up once a health crisis hits. We need to be there before, during and after.”

The report highlights that an outbreak equivalent to the 1918 influenza pandemic could kill an estimated 50 to 80 million people, spreading around the world in less than 36 hours and wiping out nearly five percent of the global economy. In the case of a pandemic, many national health systems would collapse, with low-resourced communities hit the hardest.

According to Tedros Adhanom Ghebreyesus, current WHO director-general, “Ebola, cholera, measles – the most severe disease outbreaks, usually occur in the places with the weakest health systems. As leaders of nations, communities and international agencies, we must take responsibility for emergency preparedness, and heed the lessons these outbreaks are teaching us. We have to ‘fix the roof before the rain comes.’”

The GPMB report also noted some recent progress on scaling up in-country preparedness. As of July 2019, only 59 countries have developed a National Action Plan for Health Security, yet, none of these have been fully financed. It stressed that, “in order to be fully prepared, all countries must create a fully costed and financed action plan, with international funders stepping in to close gaps for the poorest and most vulnerable countries.”

In the report, the GPMB urges leaders to follow through on seven urgent actions: Heads of Government (should) commit to preparedness by fully implementing the International Health Regulations, and increasing investment in preparedness as an integral part of national and international security; the G7, G20, G77 member countries and regional intergovernmental organizations (should) follow through on their funding and political commitments for preparedness and regularly monitor progress at annual meetings; all countries (should) build strong preparedness systems, with heads of government appointing a high-level coordinator to lead efforts across all government departments and sectors, to prioritize community involvement and to routinely conduct multisectoral simulation exercises; countries, donors and multilateral institutions (should) prepare for worst-case scenario of a fast-moving pandemic due to a virulent respiratory pathogen by scaling-up research and development for new vaccines and medicines, surge manufacturing capacity and rapid information sharing systems; the IMF, World Bank Group, and international financing organizations (should) integrate preparedness into their replenishments, national and international financial risk assessments, incentive systems and funding mechanisms; development assistance funders (should) create incentives and increase funding for preparedness to fill financing gaps for the poorest and most vulnerable countries and member states to increase their contributions to WHO for its preparedness and response support to counties and a sustainable Contingency Fund for Emergencies; and the United Nations to strengthen preparedness and epidemic response coordination at the international level.