The market capitalization of the top 100 global banks plunged by €300 billion in the third quarter of 2020 to €3.8 trillion from the €4.1 trillion recorded in June 2020. This information comes amidst ongoing falling interest rates and new money-laundering allegations that have renewed pressures and uncertainties in the global banking industry, which have also left the top largest banks falling behind the global capital market recovery, aBuyShares analytical data shows. 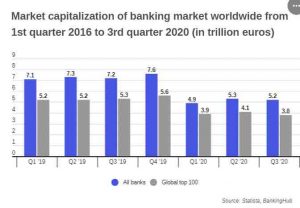 A cursory analysis of the statistics obtained by Business A.M. from Statista and BankingHub revealed that during the first three months of 2019, the aggregate market capitalisation of all banks globally reached €7.1 trillion and later jumped 7 per cent to €7.6 trillion.

Meanwhile, owing to the coronavirus pandemic which delivered a huge blow to the industry globally, the banking industry’s market capitalization fell sharply by 30 per cent year-on-year to €4.9 trillion in March 2020, the lowest value on a quarterly basis since the financial crisis of 2008. Nevertheless, the subsequent months saw recovery as all bank market cap rose to €5.3 trillion by the close of June globally and later plunged 27.5 per cent year-on-year by the end of September to €5.2 trillion.

Accordingly, data obtained from BankingHub revealed that in December 2019, the market cap of the top 100 banks climbed to €5.6 trillion. However, this figure slumped to €3.9 trillion or by 30 per cent after the crash of the stock market in March. Although, between April and June, the world’s largest financial institutions were able to make up for the losses, their recovery stopped in the third quarter of 2020, hitting a new low point of €3.8 trillion as it plunged 28 per cent year-on-year.

Furthermore, the data show that the global top banks recorded the lowest total shareholder return (TSR) performance across all industry sectors in the third quarter of 2020, falling by 1.7 per cent on a quarterly basis.

However, the US banks were able to maintain the TSR in Q3 while the European banks saw 11.7 per cent fall on a quarterly basis in their TSR, reflecting on the European Central Bank’s extended dividend ban for the eurozone banks. Meanwhile, the statistics also revealed that Banco Santander, Societe Generale, Banco Bilbao Vizcaya Argentaria, and HSBC have been the hardest hit, with their TSR falling by 26.4 per cent, 23.5 per cent, 22.6 per cent, and 20.4 per cent, respectively.

In a recent data report by Yahoo Finance, Banco Santander saw the largest year to date market cap decrease among all top banks in Europe, falling by 38 per cent to $38.5 billion, while United Kingdom’s HSBC lost nearly $60 billion in market cap since the start of the year, making it the second-largest fall in the continent. Although foremost US banks performed well in Q3, their market cap still stands below their 2019 figures.

Also, JP Morgan Chase, as the leading banking group globally saw a 19 per cent year-to-date drop with the value of the combined shares falling from $429.9 billion in December 2019 to $345.6 billion early in November.  Bank of America saw its market cap rise to $233.6 billion in November despite recording a figure lower than December 2019 figures by 25 per cent.

Meanwhile, the statistics revealed that Wells Fargo market cap plunged significantly to 55 per cent year-to-date to $99.5 billion, while the Industrial and Commercial Bank of China, China Construction Bank and the Agricultural Bank of China witnessed 13 per cent, 10 per cent and 8 per cent declines respectively in their year to date market capitalization.