Akinwumi Adesina, president, African Development Bank, has called for greater access to finance for African women when he addressed the inaugural session of the Global Gender Summit. 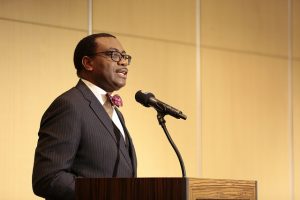 “When women borrow, they always repay. And 90 percent of them repay their loans without the least problem. So, where is the risk? The problem is prejudice and the banks’ lack of flexibility. We must leave this behind to allow women access to financing,” President Adesina urged.

Dieng said, “It is important that financial institutions support initiatives from women. They have the market gardens and produce to process. They create start-ups in innovative areas. But they lack resources and collateral, and the procedures for accessing loans are complicated. These women have relatively moderate finance needs, just enough to create projects and jobs. They need support from the private sector and the banks to help them weave their way into the economy.”

Temu advocated “holding discussions with countries to improve the business environment. What is especially needed is legislation that reassures the banks. There are a number of actors, banks, investors, entrepreneurs and clients operating within the economic market. Everyone needs to be in communication to address the risks.”

For Anan-Ankomah, Ecobank is already making big strides to gender parity. The pan-African bank has signed up to the African Union gender parity principle of 50/50. “Currently we are at 46 percent and out of that, 30 percent of those women are in senior management positions,” she said.

Ngiriye said that she had seen little change in nearly 30 years: “The problem that comes up again and again is that of collateral.”

According to Adesina the financial sector had a responsibility to the women of Africa. And he made an announcement: “From now on, we shall be grading every African financial institution for how well it helps women. Every financial ecosystem must evolve to support women. And we are going to put pressure on the guarantee banks.”

The African Development Bank and the government of Rwanda are hosting the Global Gender Summit from 25 to 27 November in Kigali. The Summit is being organised by the Multilateral Development Banks’ (MDBs) Working Group on gender for the first time in Africa.