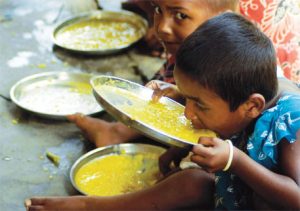 Asia is “unable to feed itself” — and needs to invest another $800 billion in the next 10 years to produce more food and meet the region’s needs, according to a report.

The population in Asia is growing, and consumers are demanding safer, healthier, and more sustainable food.

Food spending will more than double — from $4 trillion in 2019 to over $8 trillion by 2030, said the Asia Food Challenge Report which was released last week.

“If this investment does not materialise, we believe the industry will struggle to keep up with demand, resulting in poorer food outcomes for Asia’s population,” according to the authors of the report which was compiled by PwC, Rabobank, and Singapore investment firm Temasek.

Why Asia is facing a food problem

“Asia is unable to feed itself, relying on imports flowing through long supply chains from the Americas, Europe and Africa,” according to the report that was released Nov. 20.

That’s consistent with research from a 2018 United Nations Conference on Trade and Development report. “In general, countries in Latin America, East Africa and South Asia are net food exporters, while most of the rest of Asia and Africa remain net food importers,” the Key Statistics and Trends in International Trade report said.

That means Asia relies heavily on other countries to meet one of its basic needs.

“Food, this is a sensitive topic, and many wars and many internal uprisings have been fought over food in located history. And that will probably continue to be the case,” PwC’s Richard Skinner said at a media preview one day before the report was released.

“We’re too dependent on others both for our technology and our food. And if we don’t solve this, there will be problems on our doorstep,” Skinner, Asia Pacific deals strategy and operations leader told CNBC’s Squawk Box last week.

Climate change and population growth will also add to the region’s problems by causing supply issues, as well as price volatility. For one, extreme weather could reduce crop yields and change planting structures, said the report. The amount of arable land for each person in Asia is expected to decline by 5% by 2030, it said.

Meanwhile, Asia’s population could grow by approximately 250 million in the next decade — “the equivalent of another Indonesia,” according to the report.

“When you start to add them all up, whether that’s climate change, increasing population, a more demanding consumer, all of those together is a pretty scary stark picture,” Skinner told CNBC. “If we don’t solve this, we will be in a bad position in 10 years time.”

There’s an $800 billion investment opportunity in Asia’s agri-food industry that needs to be filled in the next decade, said Skinner, adding that technology and innovation, in particular, will be key.

About half of that investment could go to China, according to the report.

“The biggest opportunity for the agri-food sector in Asia is probably in China,” said Temasek’s Anuj Maheshwari at the media preview on Tuesday. That’s because agricultural companies which use smart automation technologies already exist in the country, he added.

For instance, Shenzhen-based DJI manufactures agricultural drones, which spray pesticides and fertilizers, and find the source of disease outbreaks. The Chinese tech firm accounted for over 70% of the world’s civil drone market share in 2018, according to drone analysis company Skylogic Research.

That’s why Chinese cities such as Shenzhen, Beijing, and Shanghai could be potential agri-food innovation hubs, said the authors of the report. These places have agri-food experience, a strong regulatory environment for startups, and competitive talent, according to the report, and taken together, they’re poised to drive innovation and investment within the industry.

Singapore and the India city of Bangalore, among others, were also named as hubs.

“Perhaps one day consumers will choose (and pay more for) a food product because it bears the Singapore or Bangalore stamp of approval,” the report said.

“‘Produced with Singaporean technology’ could become a trusted regional hallmark for Southeast Asian food in years to come.”