The rise of automation and resulting job losses could force the federal government to guarantee some income for everyone, but that won’t happen for years or even decades, according to some academics at the Massachusetts Institute of Technology.

This sort of payment, usually referred to as Universal Basic Income (UBI), has been embraced by much of Silicon Valley and other tech enclaves, in part to offset anxiety that the technology built in these places is killing off people’s livelihoods.

UBI, if enacted, would be a flat payment to every citizen that would, in theory, act as a basic safety net for those who have little.

Proponents, like Tesla (TSLA, +2.07%) and SpaceX founder Elon Musk, have argued such payments would be more efficient and less bureaucratic than current welfare programs.

But opinions vary as to when such a program will be needed. “We are nowhere near peak employment,” said Andrew McAfee, co-director of MIT’s Initiative on the Digital Economy, while speaking Wednesday at the MIT Sloan CIO Symposium. “We are nowhere near a plateau in how much work our economy requires to function.” 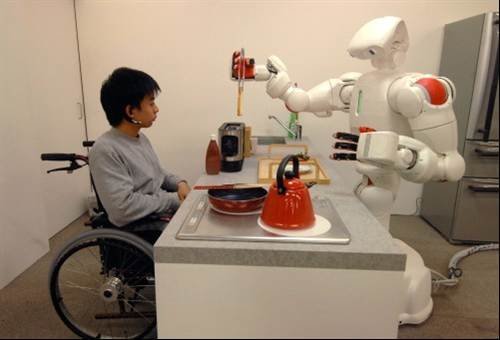 His view: “Thinking of a post-work world is incredibly premature.”

His colleague, Erik Brynjolfsson, who is director of the initiative, agreed: “There is no shortage of work that only people can do. We are moving very, very fast, but it’s decades before we get to that kind of world.” But, Brynjolfsson continued, people need to be willing to re-train themselves as needed and to be engaged.

The notion that robots or automation will take on the jobs of millions of people is a nagging source of anxiety for many people. As has been reported, workers ranging from truck drivers—of which there are an estimated 1.8 million in the U.S.— to airline pilots to paralegals to surgeons are already being affected by automation.
Optimists say that while robotics and automation will subsume lower-end jobs, people will migrate to higher-level, more skilled work. Several speakers mentioned the need for people with expertise in their jobs to train robots and to program artificial intelligence tools. But is that really a long-term solution?

Ryan Gariepy, co-founder of OTTO Motors a specialist in automated driving, doesn’t think so. (This company, based in Kitchener, Ontario, is not the same as OTTO, the self-driving car specialist purchased by Uber.)

“People who move materials around may become robot maintainers or fleet managers, but I don’t think we’ll see net new job creation,” Gariepy said. His view is that fewer workers will be needed to keep the world moving, and thus, there will be a real need for a boost from social programs.

“Sure, some people who move materials around will become robot maintainers or fleet managers, but I don’t think we’ll see net new job creation,” Gariepy said.” Technology, in his view, will make more jobs obsolete faster and faster as time goes by.

“Truck drivers cannot afford to go back to school. It’s reasonable to assume that 90% of those jobs will disappear within a generation,” Gariepy said.That could mean 1.6 million truck drivers may need universal basic income in relatively short order.