Bitcoin reversed steep losses as miners began using new software which aims to bridge an ideological gap that has threatened to divide the crypto-currency.

Bitcoin’s community has been at bitter odds for more than two years about how to solve its scaling problem, which has hampered the cryptocurrency’s growth and allowed rivals like ethereal to steal some of the spotlights.

The new software, known as SegWit2x, is seen as a compromise for the two sides of the debate: miners who act as the backbone of the blockchain, and developers known as Core who uphold bitcoin’s bug-free software. While both sides have incentives to reach a consensus, Bitcoin’s lack of central authority has made reaching agreement difficult. 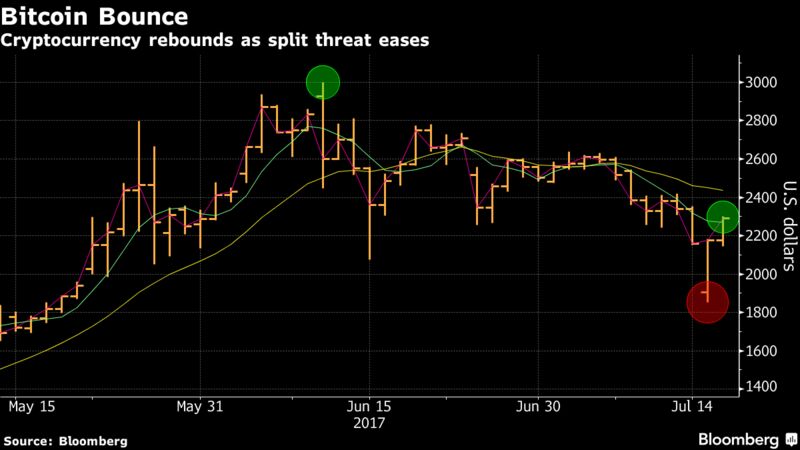 SegWit2x was formally released over the weekend and has already gained adoption by large miners Antpool, BTCC and Bixin. About 55 percent of blocks mined in the last 24 hours were done with SegWit2x, according to coin.dance, which monitors blockchain activity.

If support reaches 80 percent and maintains that threshold from more than two days, it will move bitcoin closer to avoiding a split.

“Traders are excited by the prospect of a resolution to the scaling debate, which is why the price has rallied,” said Thomas Glucksmann, head of marketing at Hong Kong-based bitcoin exchange Gatecoin.

Despite the progress with SegWit2x, some warned that Bitcoin isn’t out of the woods yet. Many Core members still vehemently oppose the software, which they say hasn’t been properly vetted for bugs. Also, not all miners support SegWit2x, which they say is a flawed compromise that doesn’t solve the root scaling problem.

“This price rally is a bounce, we are very bearish in the near term for a number of reasons,” said Harry Yeh, managing partner at digital currency dealer Binary Financial, who cites the lack of support from Core developers as one of his biggest worries. “Anytime the price rockets up quickly, it will be followed by a strong correction which we are starting to see. We are definitely headed for some turbulent and volatile times in the short term.”