Godwin Emefiele, Central Bank of Nigeria (CBN) governor,  yesterday emerged from his oath taking, vowing to, in his second term, strengthen efforts to stimulate growth and job creation in critical sectors of the economy in order to insulate it from global economic shocks. 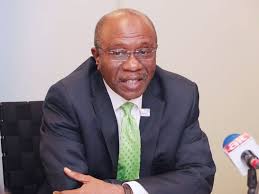 He said the CBN would be more people-focused and enabled to play an active role in supporting job and wealth creation in the country.
The CBN governor added that more work still needed to be done in building a stronger economy for the benefit of all, adding that he would unfold a new road map for the CBN and the economy next week.
Emefiele spoke shortly after being administered the oath of office for a second term by the bank’s Secretary and Director, Corporate Secretariat Department, Mrs. Alice Karau.
While evaluating the various intervention programmes undertaken by the CBN to reduce weaknesses in the Nigerian financial system as well as support improved productivity of the Nigerian economy, Emefiele said there was still more work to be done to build a stronger economy.
He said all stakeholders must rise to strengthen efforts at building a healthy and stable system in the best interest of the country.
According to him, the pace of Gross Domestic Product (GDP) growth remained fragile and below the rate of Nigeria’s annual population growth at 2.7 per cent.
As a result, he said the apex bank would continue to collaborate with the fiscal authorities to strengthen growth and wealth creation in the country.
He said: “We must strengthen our efforts over the coming years to stimulate growth and job creation in critical sectors of the economy, which will help insulate our economy from shocks in the global economy.
“We must also work to build a healthy and stable financial system that contributes to the growth of our economy, while preserving price stability.”
Emefiele, who was received into the bank by the four deputy governors, appeared to be happy by the turnout of excited staff that thronged the venue of the oath-taking ceremony, chanting his name.
He expressed gratitude to God for his return and thanked President Muhammadu Buhari for nominating him and the Senate for confirming his appointment.
He also thanked the management and staff as well as the media for all their support during his first term in office.
Buhari had on May 8 submitted the name of Emefiele to the Senate for confirmation of his second and last five-year tenure as CBN governor.
The Senate at plenary had referred the president’s letter to the banking committee for further legislative action.
The committee thereafter screened Emefiele and recommended him for re-appointment as CBN governor, saying he performed creditably in his first term.
Businessamlive Website Stats