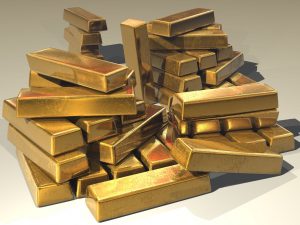 The US and China have agreed on a truce to their trade war. The BBC reports that trade talks between President Donald Trump and President Xi Jinping are set to resume again after the two leaders reached an agreement at the G20 summit in Japan. The truce, however, is tenuous, and not an assurance that the trade war will finally come to an end. There have been many knock-on affects across the globe with one of the most significant being the surge in the price of gold.

Prior to this truce, the US-China trade war had been hurting the global economy. It has slowed down trade growth worldwide, decreased global domestic product, and sent stock markets around the world on downturns. In May, for instance, benchmark indexes in London and Paris went down by as much as 1%, while Frankfurt’s DAX fell by 0.6% after China threatened to blacklist foreign companies from its market. China’s Shanghai Composite and Hong Kong’s Hang Seng declined by 0.3% and 0.1% respectively, and the US’s Dow and S&P 500 both shed 0.6%.

While the global stock markets have felt the impact of the trade war, the impact on the price of gold has been positive. Investor Matthew Bolden explains that gold is unlike base metals, which are affected by tariffs since they are used in industries such as manufacturing. In contrast, gold is primarily viewed as “an investment vehicle,” which means it is largely unaffected by tariffs. As an investment vehicle, gold’s prices tend to be stable even in times of turmoil. This is why it is classed as a safe heaven asset. Case in point was the 2007-2008 global financial crisis, when the price of gold worldwide rose from a low $600 (₦216,692) to a little over $1,000 (₦360,270) during 2007. The price of gold also surged to as much as $1,400 (₦505,615) during the 2010-2011 trade war.

The same thing happened to the global price of gold at the height of the current US-China trade war. Business Insider’s gold price commodity graph shows how gold prices trended up in May and into June, just as rhetoric between the US and China signaled a full-on, extended trade war. FXCM’s gold price chart shows that the value breached the $1,400 (₦505,615) mark on June 20, reaching a high of $1,424 (₦514,283) towards the end of the month. However, the price of gold worldwide seems due for a market correction, and that is primarily due to Presidents Trump and Xi agreeing to restart trade talks. The global gold price has now fallen below $1,400 (₦505,615). In a rather ominous sign for the yellow metal, spot gold suffered its biggest intraday fall this year, dropping by as much as 1.8% to $1,384.06 (₦499,837) an ounce. The fact that such a drop occurred right after the truce was agreed isn’t surprising, as the development has steadied markets across the globe. Yet with no firm agreement in place, the price of gold isn’t expected to drop much further for the foreseeable future.