My name is Simon Watango and I am an African Prince and one of the lucky few that bought Bitcoin at $0.10 dollars in 2010, today that $100 investment its worth more than $5 million that’s over 1 billion Naira. For the price of $150 dollars a month I will show you how to buy Bitcoin and own a Lamborghini just like me.

Welcome to the Crypto guide for Nigerians by 100 MPH LTD.

Over the next couple of months I will foolishly endeavour to demystify Bitcoin, cryptocurrency and the blockchain technology industry for my fellow brothers and sisters.

A quick confession before we proceed. My name isn’t Simon and I don’t own a Lamborghini. My actual reality is, I’m sat here listening to the generator’s deafening noise hoping that NEPA will bring light pondering deep life questions like, when will be able to stop buying Diesel and what on God’s earth was I doing with my life in 2010 when bitcoin was $.0.10?

Anyway now that I have your attention. Fill your cup, grab a chair and gather round as I take you back…

Once upon a time circa 2007 to be precise in a distant land we call the overseas (UK, US and Europe) distinguished gentlemen of the banking industry were thinking of fabulous ways to enrich themselves and their shareholders. Eventually they stumbled upon CDO’s (collateral debt obligations) and realized they could make a handsome profit selling these bundled packages of debt to other financial institutions. Needless to say due to a lack of regulation, greed and recklessness the Global Financial Meltdown ensued. The markets crashed, companies went bankrupt and people lost their jobs and homes all whilst governments bailed the same distinguished bankers out with taxpayer money. 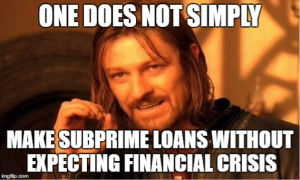 In the midst of the meltdown a young Jedi computer programmer by the name of Satoshi Nakamoto was watching and vowed to use technology to create a revolutionary digital form of money. This way he could prevent the 2008 crisis from happening again. Satoshi would combine several already existing technologies and on the 3rd of January 2009 bitcoin was born.

The official definition states it’s a type of digital currency in which encryption techniques are used to regulate the generation of units of currency and verify the transfer of funds, operating independently of a central bank. However if anyone asks just tell them its digital money with no central bank.

So how are bitcoins made? 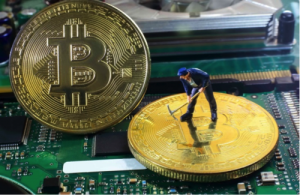 Bitcoins are generated in a process called mining, not the type you get across Africa which usually involves underpaid and poorly treated men, women and children but the type that is done by a computer calculating a complex math equation. Miners use mining software and powerful computers to compete against each other in a race to solve the equation and win a share of the newly generated bitcoins. Satoshi ensured just like real mining, bitcoin mining is energy intensive and like diamonds bitcoins are finite in number. This form of mining is called Proof of Work which makes sense as mining computer have to work really hard.

Can I use it to buy Yam?

Hold On! To become an accepted form of digital money people must be able to transact ie trade but this presents a major problem, DOUBLE SPEND. Let me explain lets say Tunde sends 1 bitcoin to Emeka for Yam. How do you ensure that Tunde doesn’t commit 419 (fraud) and sends the same bitcoin to Sade for beans? Satoshi needed a way to record each transaction permanently without the possibility of tampering by the likes of Tunde.

We all kind of know what ledgers are right? Accountants and banks use them to record transactions, an excel spreadsheet can be used as a ledger. The difference being that on this spreadsheet you can only add items and once you add an item it can’t be removed. Now imagine if this special spreadsheet existed on a network of computers around the world and every time Tunde sent 1 bitcoin (BTC) to Emeka the computers would sync together to make sure they all have the correct transaction information. Once the majority of computers agree on the transaction details the transaction is recorded permanently across all ledgers.

So now Satoshi had a way of eradicating double spend and creating an immutable record of how bitcoin transactions between parties.

What has this got to do with Blocks and Chains?

Each ledger only has a certain amount of space to record transactions. Once a ledger is full it is packaged together with other full ledgers and is called a block. When you join two or more blocks together it is called a BLOCKCHAIN 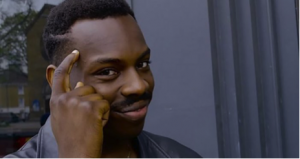 So why all the fuss?

Well it turns out that blockchain technology can be used for more than just recording money transactions. In fact we are just scratching the surface of Blockchain use cases. Remember mobile phones and the internet? Look how big those two became. They would have labelled you a high priest of witches if you had predicted we would use our mobile phones to take selfies, listening to music and use the internet for dating, hailing taxis and watching movies.

Definitely, but it will require patience and just like Aunty Patience from the village, Cryptocurrency and Blockchain are here to stay! We don’t really like you Aunty, but you’re family and you make a great Egusi Soup. What I’m trying to say is that the technology and innovation has the potential to completely disrupt the status quo of corruption, fraud, wealth opportunities, rigged elections and unaccountable governments within Africa. In the end it will fuel the engine of the next industrial revolution and seeing that Africa didn’t really participate in the last three (slavery doesn’t count) now is a great time to heed the African proverb “Knowledge without wisdom is like water in the sand”